A return to the Liverpool starting line-up for the first time since Gameweek 4 last weekend failed to produce the Fantasy points for Philippe Coutinho. With the Brazilian installed wide left, Brendan Rodgers moved from 3-4-1-2 to 4-4-2, allowing the winger to drift inside and dictate matters centrally.


In this latest Technical Area article, we cast an eye over last Saturday’s Anfield encounter and assess Coutinho’s role as the Reds prepare for a favourable run of games. With showdowns against Hull, Norwich, West Ham and Cardiff in four of the five fixtures directly following their Gameweek 12 trip to Goodison, Rodgers’ side are handed the chance to continue the form that sees them sit just two points off the summit. 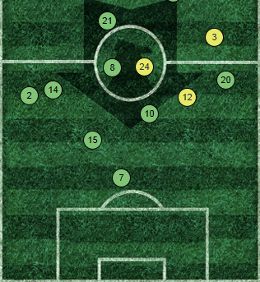 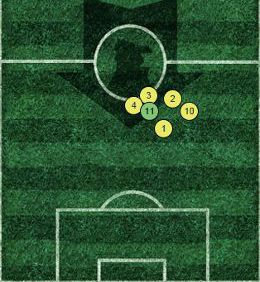 Looking at Liverpool’s average position map (left) in the 4-0 mauling of Martin Jol’s men, it’s clear to see how much leeway Coutinho (10) had to impose himself in the middle. While Jordan Henderson (14) played a more conventional role on the opposite flank, the Brazilian continually shifted inside to find possession and was as central as Daniel Sturridge (15) when on the ball, allowing Luis Suarez (7) the chance to push forward and wreak havoc on the visitors’ defence.

Compared to his previous average positions for the season (right), Coutinho’s role against the Cottagers was very similar. Crucially for Rodgers, the Brazilian’s first four Gameweeks were on the left of a 4-2-3-1, with Suarez still suspended at that point in time – the fact that Coutinho still found so much time and space playing with a front two, as opposed to a lone forward, bodes well for Liverpool’s attacking potential, then.

Although Rodgers has talked up the Brazilian’s chances of a role in “the hole” in a 3-4-1-2, it’s noticeable that, in all of the five games Coutinho has started, Liverpool have played with a back-four – indeed, even his second-half introduction in the previous Gameweek’s defeat at Arsenal saw Rodgers move to 4-4-2.

Coutinho’s Gameweek 11 performance, in comparison to his four appearances prior to sustaining a shoulder injury at the Liberty, is hugely encouraging for his owners and would-be Fantasy suitors. Certainly, the stats should be taken in context – Liverpool averaged 48.4% possession in those first four fixtures, whereas on Saturday, a dominant display allowed them 68.4% of the play.

Nonetheless, in his first appearance in the same side as Suarez this season, the upturn in overall performance is marked. Coutinho had 112 touches of th ball at the weekend, a massive improvement on his 61.8 beforehand. His number of touches in the opponents’ final third more than doubled (up from 30.5 to 63), as did his passes received (14.2 up to 36), while the number of successful passes made in this crucial area almost trebled; a total of 35, up from 12.2 beforehand.

In spite of his time on the ball, Coutinho’s creativity remained relatively similar – he produced 2 “key passes” against the Cottagers, just up on his previous average of 1.5. Goal potential, though, is another matter entirely – his total of 9 touches inside the area was more than he managed over the first four Gameweeks altogether, with an average of 2 per appearance. Coutinho fired 9 attempts on goal in the 4-0 rout – once again, this is a huge improvement on 2.8 per game – whilst his close-range menace saw him register 4 shots inside the Fulham penalty box, up from 0.8 per appearance beforehand.

Such a significant upturn can be partly put down to Fulham’s defensive stats, though. Prior to last week’s encounter, Jol’s side were second most porous for shots inside (99) and outside (83) the box; faced with such a weak opponent, Liverpool were always likely to run riot – indeed, Rodgers’ side registered a total of 32 shots in the 4-0 win.

While Fulham’s dismal display undoubtedly affected Coutinho’s stats, a comparison with his team-mates is perhaps the fairest way of assessing his performance in context. The move to 4-4-2 allowed Henderson plenty involvement on the Reds right, with a total of 106 touches almost on a par with Coutinho’s 112. Inside the final third, the Brazilian was on the ball more or less as much as Suarez, with 63 touches to the Uruguayan’s 64 – Sturridge, on the other hand, had just 23; less than half Henderson’s tally of 48.

Henderson’s impressive contribution is again highlighted with the number of passes received inside the Fulham defensive third – a total of 40 was more than any home player. While Coutinho (35) and Suarez (31) were again relatively similar, Sturridge’s peripheral performance saw him manage less than half his strike-partner, managing just 15 before being subbed off late in the second-half.

In terms of distribution in the final third, Liverpool’s wide men made exactly double the number of successful passes as the front two (66 to 33), with Sturridge again the weak link – he made just 10 against the Cottagers, less than half Suarez’ 23. Despite making more successful passes in this area than any of Rodgers’ main threats, Coutinho was left behind by Suarez and Henderson when it came to teeing up goalscoring opportunities for team-mates; the latter pair made an impressive 6 “key passes” apiece.

Inside the box, Suarez’ extraordinary display saw him make 20 touches – more than the other three combined – though what also catches the eye is that, in the trio’s first match together in the XI, Coutinho managed more than Sturridge, by 9 to 6. Suarez leads the way for shots, with a total of 10 but, once more, Coutinho proved superior to Sturridge, registering more than double the number of attempts (9 to 4) and also bettering the former Chelsea star for efforts inside the area, by 4 to 3. Yet again, though, Suarez proved superior to his team-mates with a total of 7 harvesting a couple of goals.

When assessing the overall impact, it’s obvious that Fulham’s dire defence played a real part in such an improvement. At the same time, though, Coutinho’s stats, relative to his fellow Liverpool players, bode well for future returns and clearly show the weekend blank was somewhat unfortunate.

The data merely emphasises Suarez remains a phenomenon and is head and shoulders above his team-mates but the fit-again Brazilian not only looks a real differential option for our five-man midfields (at 8.5 in Fantasy Premier League, with a 5% ownership) he may well prove an alternative to Sturridge as a route into Rodgers’ side ahead of that upcoming schedule.

*The Technical Area is put together using the statistics and maps available in our members area. For access to such data and tools on every player, team and match of the 2013/14 season, and for exclusive members articles like this, click here for details.