As many of you will have noticed the Fantasy Premier League’s (FPL) Bonus Point System (BPS), which is used to calculate bonus point allocation, has been altered ahead of the 2014/15 season. This articles outlines the differences between this year’s system and last year’s and how it may affect your squad selection as the new season approaches. 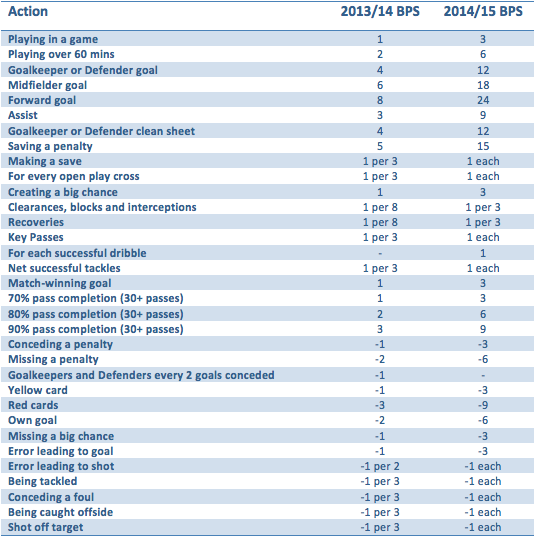 The above table shows that for most actions the BPS points awarded have been tripled. There are also additional points for successful dribbles as well as the removal of negative BPS for every two goals conceded for goalkeepers and defenders. The thresholds for gaining points for multiple actions, such as for recoveries, have also been reduced, by a factor of between two and three. The effects of these are harder to ascertain as getting seven recoveries last season would have got a player no BPS points whereas this season you would receive two BPS.

As a result of this, I figured the only real way to determine the effects of these changes was to apply this season’s BPS system to last season’s matches to compare apples with apples. I have done this for 164 matches between GWs 20-38, ignoring any match involving a team with a double Gameweek. Statistics were gathered from the Fantasy Football Scout members area.

EFFECTS OF THE CHANGES

With the stats for Gameweeks 20-38, I applied the scoring matrix shown in this year’s rules. The only exception to these stats is the big chances created, which were not available in the members tables. The bonus points for each of the 164 matches that the data covered can be seen on this spreadsheet along with the actual bonus points given out last season.

Now to the real question on everyone’s lips – which players are likely to benefit from the changes and which will suffer? For the players who received bonus points under either system, I divided them up into six categories; goalkeepers, centre-backs, full-backs, defensive midfielders (purely defensive), attacking midfielders (all other mids) and forwards. I then calculated the bonus point differential for each of the players and plotted them. The results of this can be seen in this image. The breakdown of these differentials including total bonus points received can be seen here.

The most alarming result of this can be seen with the goalkeepers. Not a single goalkeeper has fared better under the new system, with the majority losing most, if not all, of the bonus they would have received. This is a result of the increase in likelihood of defenders picking up points due to blocks, clearances, interceptions, recoveries, dribbles, crosses and tackles, with goalkeepers on the other hand receiving just a minimal increase for saves.

In defence the biggest difference has been the increase in bonus awarded to the attacking full-backs. The additional points for successful dribbles help to offset the points lost for being tackled, both of these stats being common for adventurous full-backs. Few players managed to exceed the three-cross limit last season, so the alteration to one BPS per open play cross will significantly improve the chances of the full-backs picking up these points. They are also much more likely to achieve points for blocks, interceptions, and recoveries, which their central counterparts dominated last season. While some full-backs are worse off under the new system, this may be down to the fact that some assists given in FPL are not true OPTA assists and as such these would not be taken into account in my analysis. The same is true of goals that are later changed by the dubious goals panel, which are not changed in FPL.

Centre backs are a bit of a mixed bag. There doesn’t seem to be much of a trend here that I can see on first inspection. A few may have lost some points due to the overall reduction in the number of bonus points allocated, as ties are less common.

Defensive midfielders are slightly better off in general. An increased likelihood of block, clearance, interception and recovery points appears to have tipped them ahead of the competition in tight games. It’s certainly not significant enough to make them viable alternatives though.

Most attacking midfielders are better off under the new system, especially wingers. Similarly to the full-backs the additional points for successful dribbles helps to give the prolific dribblers the boost in games where they are consistently skinning their opponent. It’s also likely that many of these values are understated due to the non-inclusion of big chances created. This is particularly applicable to the set-piece maestros like Eriksen and Gerrard, whose free kick deliveries are a constant source of big chances for those on the end of them.

Moving up front, the forwards seem to be worse off in general. Due to the explosive nature of their BPS scoring it is unlikely that this is down to the overall reduction of bonus points allocated and perhaps the improved showings of the full-backs and wingers is stealing some of the bonus away from the forwards. This could also be due to FPL assists not being OPTA assists or goals being changed by the dubious goals panel as mentioned earlier.

Overall I think the changes bring the full-backs into line with the centre-backs and allow each defender to be chosen on their own merits, rather than one particular position being overly rewarded. The changes should also boost the bonus tallies of midfielders that were sorely lacking last season.

A LOOK AT THE EFFECTS OF SCORELINES

In previous seasons often the dullest of games were rewarded with the largest number of bonus points. In fact, last season a game which finished Sunderland 0-0 Crystal Palace resulted in an extraordinary 13 bonus points being awarded: Mannone (3); Alonso, O’Shea, Delaney, Dann, Speroni (2). The same match would have ended with the six bonus points under the new system: Alonso (3), Dann (2), O’Shea (1). In fact, over the eight 0-0 matches in the 164 investigated there was a reduction in bonus awarded from 76 to 54, or from an average of 9.5 per match to 6.75 per match.

In close matches won to nil the defenders mop up the majority of the bonus points. This is to be expected and likely deserved, but unlike last season, full-backs will also be in the mix, whereas under the old system it was primarily the centre-backs sharing the bonus points.

In general the more goals in a game the less impact the changes had on the bonus points, as the goal scorers and assisters had a much greater spread of BPS points than in the closer games. For more information about the impact or for a closer look see this spreadsheet or feel free to ask me directly.

Also a big thanks to TW, Blue Lion and Arvin-ation for assisting me.