Fantasy Premier League managers should start formulating a plan in their minds for the upcoming Blank and Double Gameweeks.

These provide an excellent opportunity to make up lost ground or press home a mini-league or overall ranking advantage.

The best way to make the most of these altered Gameweeks is through the use of the FPL chips.

After discussing when the Blank and Double Gameweeks could fall earlier this week, we will discuss the best transfer and chip strategies in this article.

Using Chips to Navigate the Blank and Double Gameweeks

FPL managers may have to rethink an often-used chip tactic from previous seasons this time around.

However, that strategy will not be possible this season as there won’t be a single Gameweek in which you can Wildcard between the Blanks caused by the FA Cup quarter-finals and the first big Double Gameweek, as these fall in Gameweek 31 and 32 respectively.

Gameweek 31 is likely to be the biggest Blank Gameweek of the season and many FPL managers will use their Free Hit then if they haven’t prepared for it. You’ll have plenty of time to come up with a plan to use your free transfers to prepare for Gameweek 31 and the Free Hit chip may be more useful in the subsequent Gameweeks.

That leaves the potential “extra” Double Gameweek as a perfect opportunity to play your Triple Captain chip if one team ends up with three fixture rearrangements this season.

I think an extra Double Gameweek (outside of Gameweek 32 or Gameweek 35) seems likely enough that it’s worth holding on to your Triple Captain chip for.

There will also be a third Double Gameweek if a Gameweek 27 Blank is brought forward to Gameweek 25 or 26.

It makes sense to prepare for the Blanks in Gameweeks 27 and 31 using free transfers and then decide on a chip strategy during the international break after Gameweek 31. At that point, the Blank and Double Gameweek picture will be a lot clearer.

If you have already used your Wildcard, it still makes sense to Free Hit in Double Gameweek 32 or in Blank Gameweek 33 but another option might be to focus on bringing in players who Blank in Gameweek 31, then Free Hit in that Gameweek and you’ll be well set up for the Doubles in Gameweeks 32 and 35.

Using Free Transfers to Prepare for the Blank Gameweeks 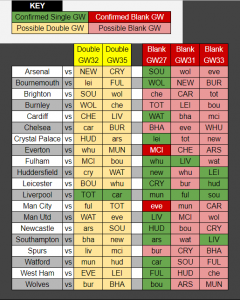 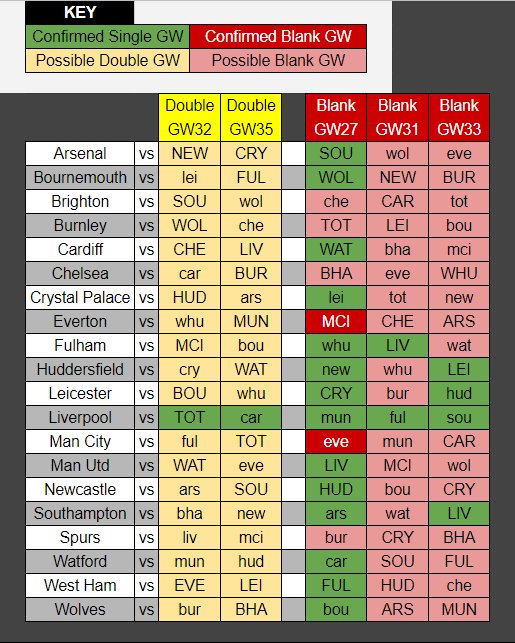 Bringing in players who won’t Blank in either Gameweek 31 or 33 will give you more flexibility when you come to chose a chip strategy for dealing with Gameweeks 32 to 35.

Liverpool are currently the only team who we know definitely won’t Blank in either of these Gameweeks, but more teams will be added to this list after each round of the FA Cup.

Liverpool’s fixtures between now and Gameweek 31 are Crystal Palace (home), Leicester (home), West Ham (away), Bournemouth (home), Manchester United (away), Watford (home), Everton (away), Burnley (home) and Fulham (away). They then play Southampton away in Gameweek 33. Meanwhile, the other top six Premier Leagues sides will likely only have somewhere between seven to nine fixtures in those 10 Gameweeks.

Tripling up on Liverpool players by Gameweek 31 is an obvious move and bringing them in well in advance of Gameweek 31 makes sense given their upcoming fixtures.

Mohamed Salah (£13.4m) is the highest scoring player in the game and with five double-digit scores in his last seven Gameweeks, he’s fully justifying his price tag. He will certainly be one of the most popular captains of the season when Liverpool travel to Craven Cottage in Gameweek 31.

The question is whether you opt to double up on Liverpool’s defensive assets with Salah or just pick one of Liverpool’s back five and double up on their attack with Salah. He could be paired with either Sadio Mane (£9.5m), Roberto Firmino (£9.3m) or even Xherdan Shaqiri (£7.1m) who’s scored five goals in his last ten appearances and tends to only be benched against tougher opposition.

Liverpool players are obviously worth bringing in now, but other than that there’s no need to let the upcoming Blanks affect your transfer decisions this week.

We’ll receive more information about all the Blank Gameweeks in the week leading up to the Gameweek 24 deadline. You might want to use your free transfers between Gameweeks 24 and 27 to make sure you can get an active starting XI in Blank Gameweek 27 whilst also keeping an eye on how your team is looking for Gameweek 31.

Spurs’ fixtures between Gameweeks 23 and 26 are very favourable with Fulham (away), Watford (home), Newcastle (home) and Leicester (home) their opponents. But after that, it has the potential to be less appealing. If they beat Chelsea in the EFL Cup semi-final second leg and win their FA Cup fourth-round tie their schedule would be Blank, Chelsea (away), Arsenal (home), Southampton (away), Blank. Accordingly, Gameweek 27 could be a sensible time to sell your Spurs players.

If Burnley lose away to Man City in the FA Cup next Saturday, Leicester will be added to the list of teams who won’t have a Blank fixture this season. The Foxes have tough fixtures in the next four Gameweeks but in Gameweeks 27 to 31 they would face Crystal Palace (home), Brighton (home), Watford (away), Fulham (home) followed by Burnley (away) if the Clarets get knocked out of the cup. They will host Huddersfield in Blank Gameweek 33 so Gameweek 27 seems like it will be a good time to start bringing in Leicester players. Ricardo Pereira (£5.3) looks like their best Fantasy asset and has received plenty of attention on the site in recent weeks.

If you are one of the FPL managers who activated your Wildcard this week after hearing about Harry Kane (£12.5m) and Trent Alexander-Arnold’s (£5.2m) injuries, you should be aware that Everton and Man City plus either Spurs and Burnley or Chelsea and Brighton will Blank in Gameweek 27 and you’ll only have four free transfers to prepare for it.

You may be in the unfortunate position of not having your Free Hit chip or your second Wildcard available but it’s still important to come up with a plan for how you’ll approach the Blank and Double Gameweeks, and be prepared to take hits.

Make sure you go back and read Ben Crellin’s article from earlier this week on predicting when the Blank and Double Gameweeks are likely to fall. READ IT HERE.

When we know more about which teams will and won’t be affected by fixture changes, we will publish some more content.

Memberships for the 2018/19 campaign are now available for the price of just £10.