One of the world’s best FPL managers, Tom Freeman, looks at the Premier League players who are prospering from free-kicks and corners.

As part of our Members Articles Unlocked week, all sections from the Fantasy Football Scout Members Area will be FREE for everyone to access in this piece.

Set pieces are an important tool in the modern game, with top teams placing more importance on them than ever.

Ahead of the 2018 World Cup, Gareth Southgate visited 2014 Super Bowl winners Seattle Seahawks and consulted set-piece specialists in both the NFL and NBA in an attempt to give England an edge.

With set pieces at the heart of their gameplan, they reached their first tournament semi-final in 22 years.

Around the same time, Jurgen Klopp ordered a complete overhaul of Liverpool’s set-piece routines, which led to the appointment of dedicated throw-in coach Thomas Gronnemark.

While some pundits and fans found the idea baffling, the Reds now retain possession from throw-ins 68.4% of the time, compared to just 45.5% prior to Gronnemark’s arrival.

At the top level, small details can make all the difference.

When looking at the Magpies’ scorers this season, you’ll notice they are mostly defenders.

Knowing they pose a threat at set pieces, and have a kind run of fixtures ahead (see below), backing one of their budget centre-backs like Jamaal Lascelles (£4.2m) or Federico Fernández (£4.4m), who has two goals and two assists in 15 starts, could pay off.

Also, Matt Ritchie’s (£5.3m) return from injury and role as a set-piece taker means his first attacking return of the season surely isn’t far away.

Last season in the Premier League, 147 goals were scored from corners.

Burnley were the most efficient, with 7.1% leading to goals, and this season, no other team has a higher xG from set plays.

The appeal with the Clarets is that we know how they like to play – long balls up to the two strikers, with an emphasis on winning second balls – and whilst they don’t create many chances, only six teams have a higher xG per shot, which is encouraging.

With 30 Premier League goals since the start of the 2017/18 campaign, Wood is on the Watchlist.

Remarkably, Aston Villa are the only team in the Premier League not to score a headed goal all season.

The signing of Tanzanian forward Mbwana Samatta (£6.0m) from KRC Genk, will look to address that.

All three of his goals in the Champions League this season were scored with his head, including his equaliser at Anfield back in November.

Having played recent matches without a recognised striker, Villa now have a much-needed focal point, and the hope is Samatta’s arrival will ease the burden on Jack Grealish (£6.7m).

In my last article I talked about Southampton, with Alex McCarthy (£4.4m) and Jack Stephens (4.4m) my preferred route into their defence.

However, having watched their recent 2-0 win at Crystal Palace, Ryan Bertrand (£4.8m) could be worth the extra outlay.

His performance was as good as I’ve seen from him in a Saints shirt, with his link-up play with Nathan Redmond (£6.2m) down the left side causing all sorts of problems for the Palace defence. 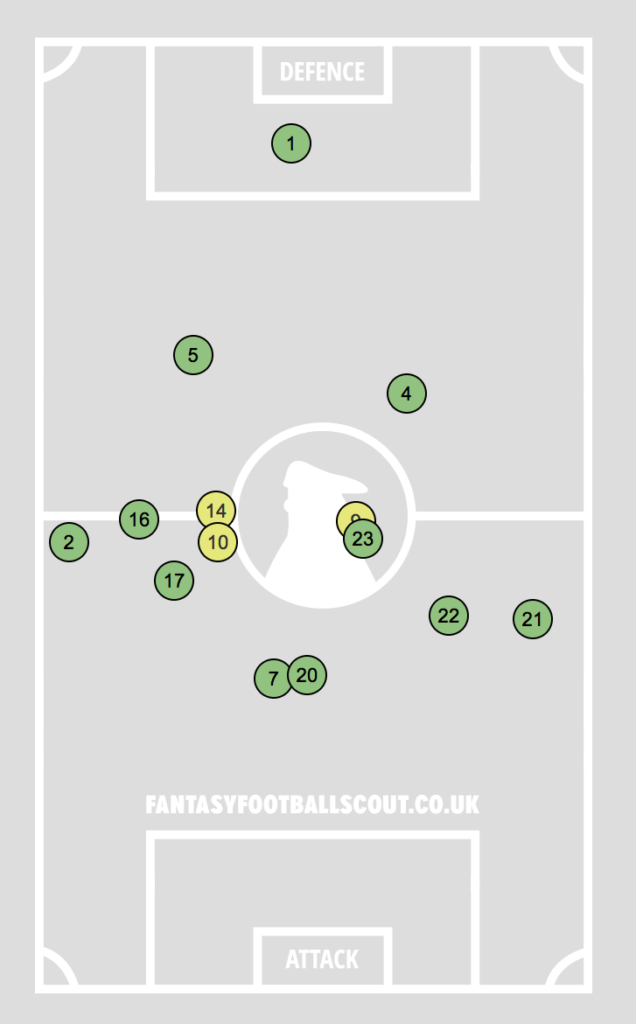 Since returning to the starting XI in Gameweek 13, Bertrand’s 462 touches in the opposition half is bettered by only five other defenders, whilst he sits in the top ten amongst defenders for xA over the same period.

Looking ahead, transfer plans are on hold till Gameweek 24 is complete and Villa’s opponents in the Carabao Cup Final have been confirmed, but for now, here’s how I’m currently set up. 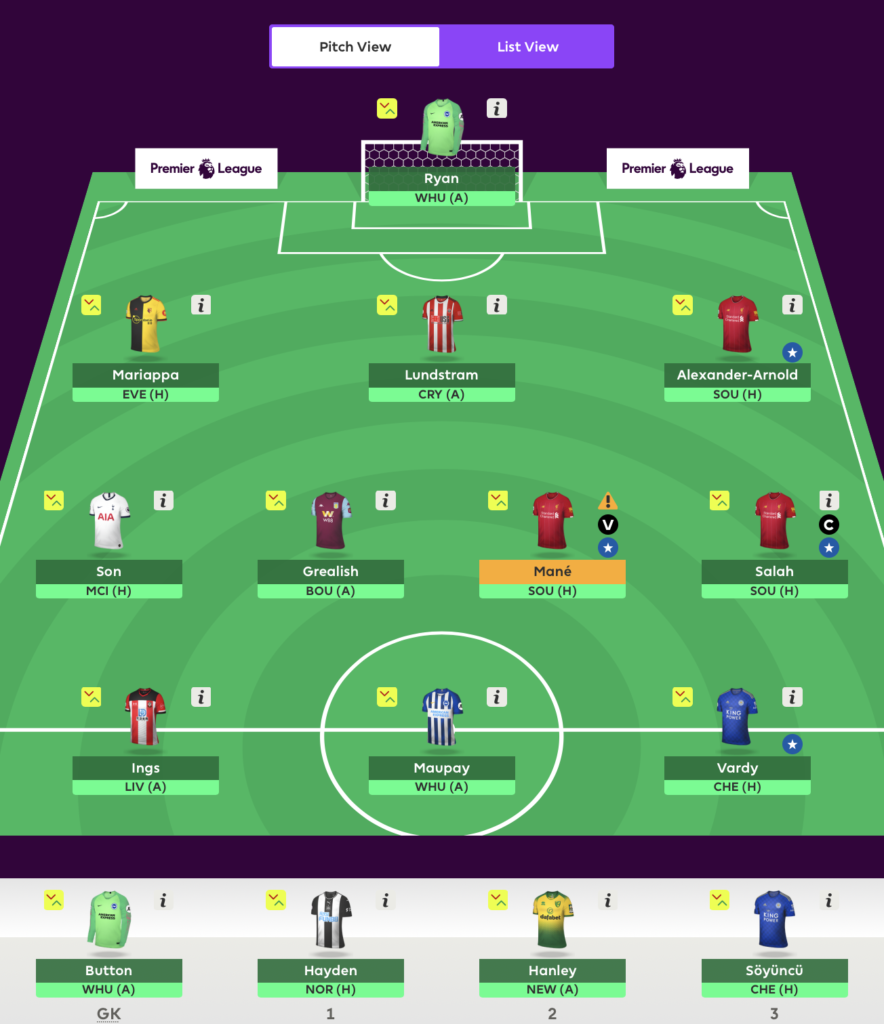 For those who have been following, you’ll notice I sold Kevin De Bruyne (£10.6m) last week.

At the time of selling, his fixture run was as follows…

With a likely blank against Arsenal in Gameweek 28, and a possible shift in emphasis towards the Champions League, I decided to cash in, replacing him with Son Heung-min (£9.9m), who faced Norwich City at home.

Turns out they both scored seven points in Gameweek 24, so let’s see how that one plays out over the next couple of weeks.