Sitting inside the top 5k after Gameweek 27, FPL Family’s Sam has one eye on Arsenal assets after their upcoming blank.

The Tottenham Hotspur fan in me hates to think too much about the other side of north London. However, where FPL is concerned, the desire to improve one’s overall rank and win those all-important mini-leagues means that sometimes we have to put loyalties aside and bring in some of those players that in real life we don’t necessarily want to do well!

With my team set for Blank Gameweek 28, I’m now looking ahead to Gameweek 29 and thinking about what my strategy might be between now and the Wildcard, which I’m currently planning to use somewhere around Gameweek 30.

By then, we will know more about the Blank and Double Gameweeks as well as who has progressed in both the UEFA Champions League and Europa League competitions, so this will inform my planning in terms of which teams I want to heavily invest in for the run-in.

At the start of Mikel Arteta’s tenure at Arsenal they, at times, struggled to find consistency both from week to week as well as within games. Whilst this hasn’t completely disappeared from their locker, we are beginning to see the Arsenal that Arteta is trying to create and therefore what his matchday teams and formations are more likely to look like.

This improvement in performances, coupled with a better understanding of the players that Arteta is building this new-look Arsenal team around, means that there are a few assets who look to be coming to the fore – especially given Arsenal’s fixtures between now and Gameweek 35, when we have the second north London derby of the season.

The new manager bounce, a lovely run of fixtures, and Arsenal players who seem happier and are thus playing better football means that they are fast becoming key to most FPL managers’ thoughts and plans.

Their early elimination from the Europa League can surely only be a boon for us Fantasy bosses, too, with the fixture schedule looking a lot less packed.

My decisions for Gameweek 28 were in part based on having enough money to bring in Pierre-Emerick Aubameyang (£10.9m) ready for Gameweek 29. But with this nice run of fixtures and with more consistency in terms of the starting line-ups, is it as simple as just bringing in Aubameyang or are there other options that we should consider either alongside or instead of the Gabonese striker?

With my Free Hit chip safely tucked away in my back pocket, owning more than one Arsenal asset feels like a sensible idea through this nice run, especially as we know that they will have at least one Double Gameweek in this period as a result of missing their fixture in Gameweek 28. So who makes a good potential FPL asset over this run of matches?

All of the stats used in this article are from Gameweek 19 onwards, when Arteta took charge of his first Arsenal match, unless otherwise stated. 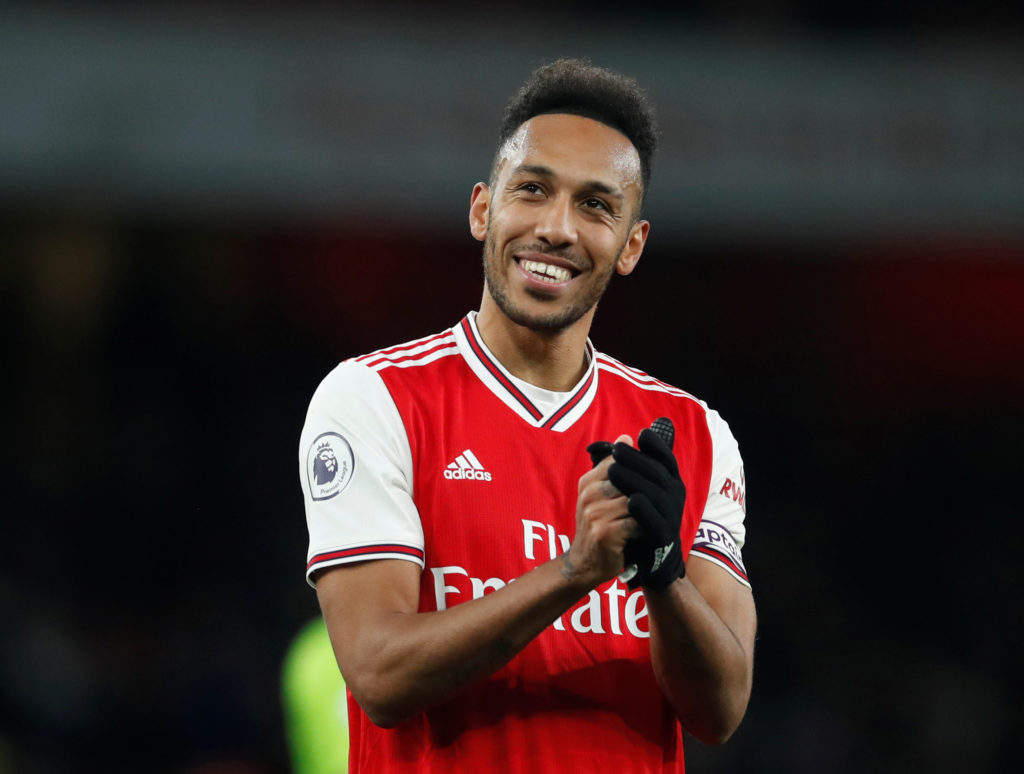 For much of Arteta’s tenure so far, Aubameyang has been mostly deployed out left. As a premium striker, this isn’t where we ideally want him to be playing.

However, for Aubameyang this role has suited him in terms of the job he is doing for Arsenal and FPL managers alike.

In the seven games that Aubameyang has played under Arteta, he has six attacking returns, thus showing that actually his positioning on the pitch isn’t having the negative impact on his returns which we feared it might.

The Gabon international has an xG of 2.84 and an xGI of 3.42 over the period studied, although obviously he also has a red card and a two-match suspension in that time.

When you compare Aubameyang and Sergio Aguero (£11.9m) over the last four Gameweeks, Aubameyang comes out on top in most of the key areas including goals, xA, goal involvement, shot accuracy as well as total BPS and baseline BPS.

Alongside the stats over the last four Gameweeks, Aubameyang also has the nicer set of fixtures and he is a full £1m cheaper than his Manchester City counterpart.

From Gameweek 29 onwards, Aubameyang seems like the striker that it is going to be the more appealing to own. He has already risen in price ahead of Gameweek 28 (when he blanks!) and I can see that trend continuing once this Friday’s deadline has passed and the fixture against West Ham in Gameweek 29 draws nearer. 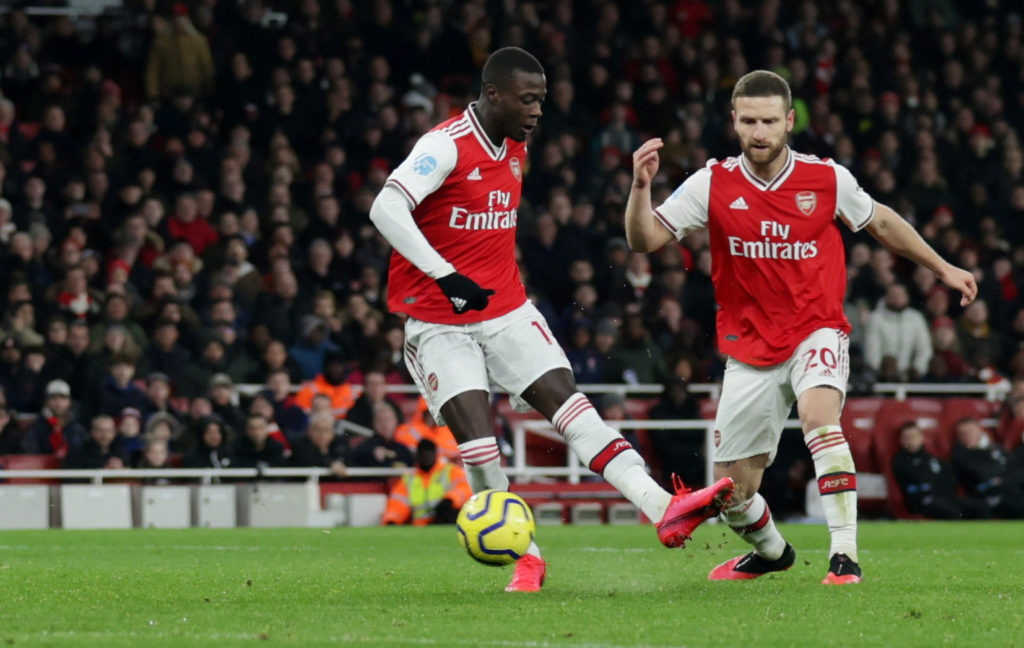 When Nicolas Pepe (£9.2m) arrived at Arsenal we, as FPL managers, were all expecting big things.

With returns in only five matches between Gameweeks 1 and 25, however, he has somewhat underwhelmed.

Gameweek 26 seemed to signal a change, for both Pepe himself and Arsenal. Newcastle United played incredibly well for the first half but Arsenal’s dominance in the second half of a 4-0 win, coupled with Pepe’s 17-point haul, showed what the winger and Arsenal are capable of.

This, followed on by a win against Everton in Gameweek 27 alongside another assist for Pepe, has thrown him into the premium midfielder conversation.

Pepe now seems to have the confidence of his manager, having secured back-to-back starts, and has found his own confidence in himself. This makes him an interesting FPL option as well as a lovely differential, given that his ownership is just 3.5%. At a time when options in the premium midfield bracket are in short supply, Pepe, with the nice fixtures to come, might just offer a solution to our problems.

Pepe’s £9.2m price tag does put me off somewhat, simply because we are yet to see him deliver on a regular basis. However, given the fixtures and his differential ownership, I think he could be worth the transfer for the next few weeks, especially as he is easy to downgrade if his or Arsenal’s performances dry up again. 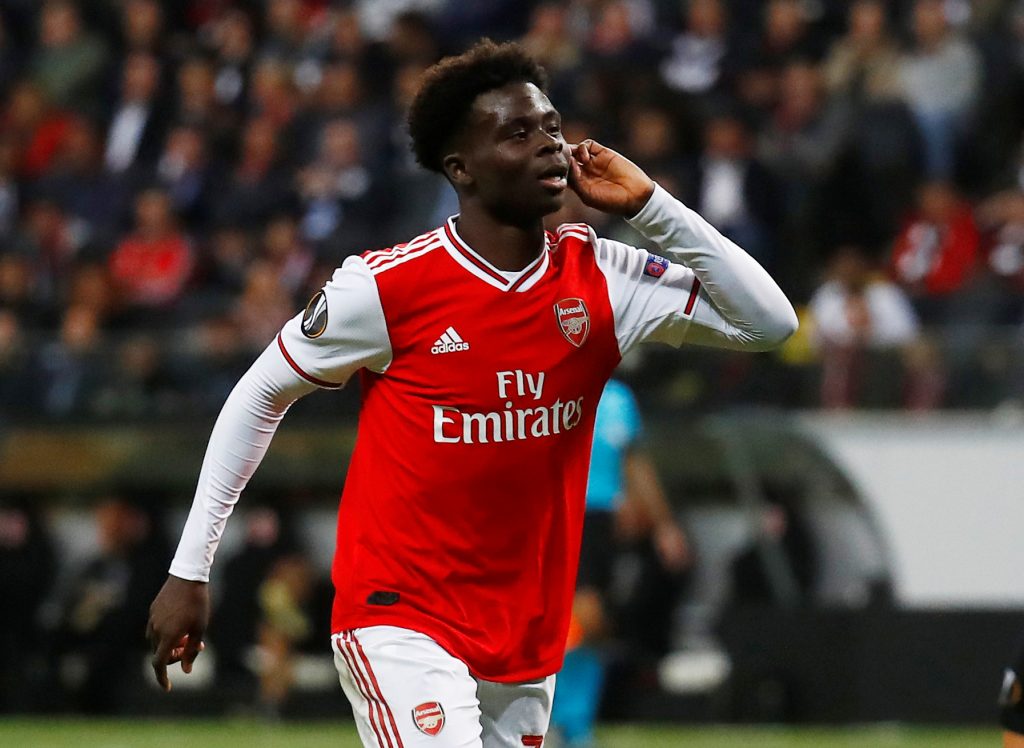 When Sead Kolasinac (£5.2m) was forced off through injury on Sunday and Bukayo Saka (£4.5m) came on to replace him, we suddenly had another option for our cheap fifth midfielder spot.

Over the course of the season, there have been numerous players who have held that spot in many FPL teams – Leander Dendoncker (£4.4m) and Todd Cantwell (£4.8m) being two of the most popular options.

Fixtures, form and, in Dendoncker’s case, the desire for FPL managers to own other Wolves assets, have meant that there is definitely scope for a change.

With the way Saka has performed of late, it is even possible to view him as a fourth midfielder if you want to build a squad which contains the likes of Mohamed Salah (£12.8m), Sadio Mane (£12.4m) and Aubameyang etc.

Normally, Saka is the kind of ‘out of position’ player who we would avoid. Playing in defence for Arsenal, yet listed as a midfielder in FPL, means that he doesn’t benefit from the full four clean sheet points should Arsenal keep one.

However, his heatmap shows that he spends very little time in defence and the majority of games in attacking positions: 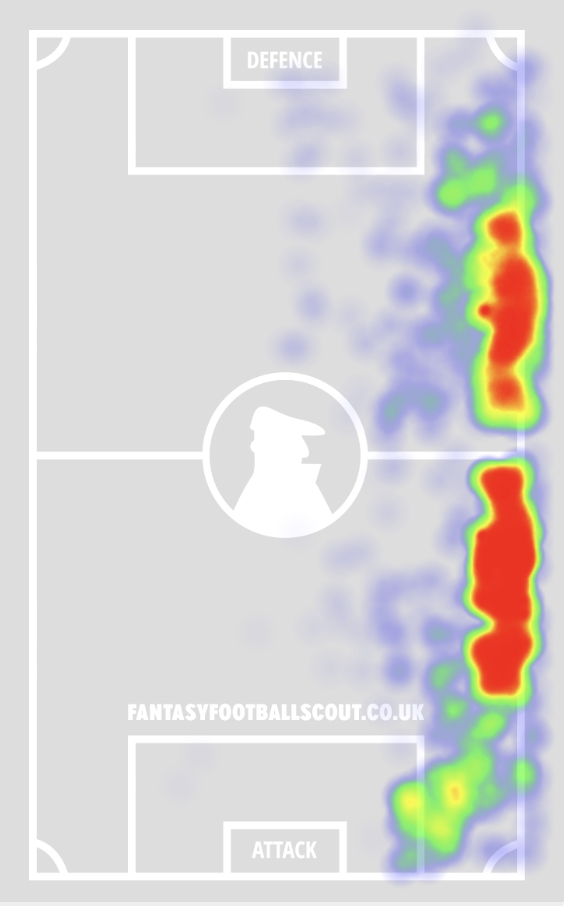 Saka now has three assists in the last five Gameweeks and, as a result of the injury to Kolasinac, he could now get a regular spot in the starting line-up, which at £4.5m and just 1.6% ownership, is music to the ears of FPL managers.

With only two attacking returns over the course of Gameweeks 1-25, we should remember that this form is new and thus may not be consistent.

He also may lose his starting position when Kolasinac is available again or when Kieran Tierney (£5.3m) returns from injury. However, at £4.5m, he is worth the place in our squads as he appears to be hitting form and getting a spot in the starting line-up at the right time for the nice run of fixtures that Arsenal are about to embark on.

Are there any other options? 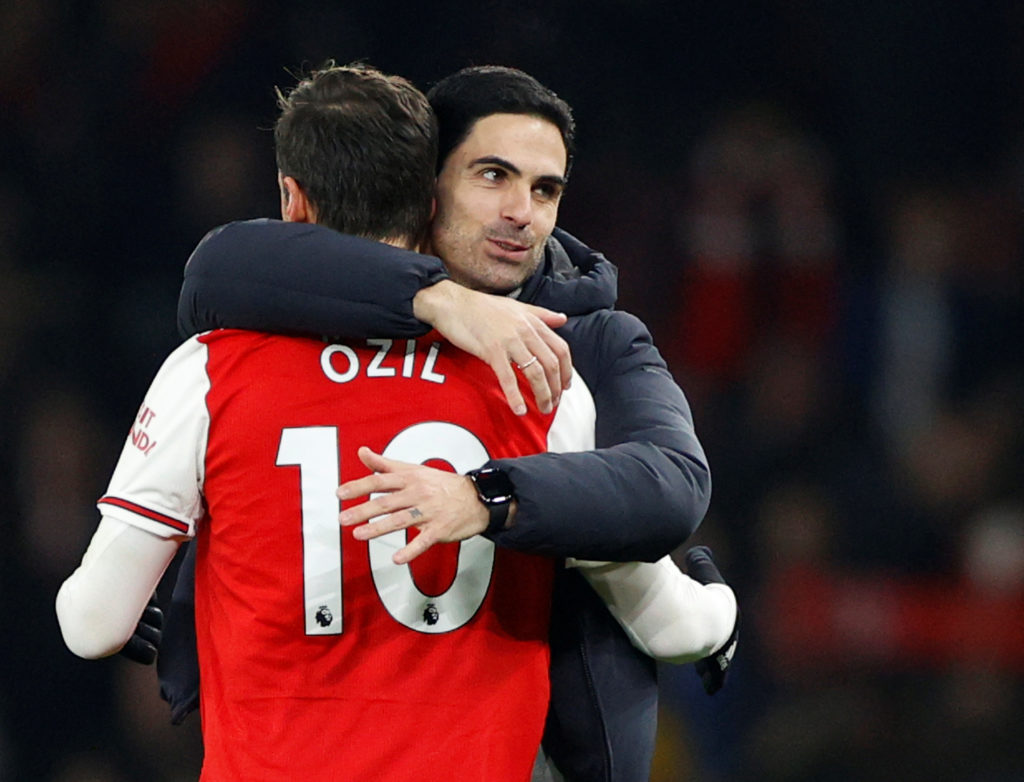 For me, their returns (or the starts, in Lacazette’s case) just aren’t consistently there and thus the likes of Saka, Pepe and Aubameyang are far better picks for your FPL teams.

Lacazette is struggling for game-time with the likes of Eddie Nketiah (£4.3m) and Gabriel Martinelli (£4.6m) striving for minutes and therefore it seems that there is only one Arsenal forward worth investing in at the moment. 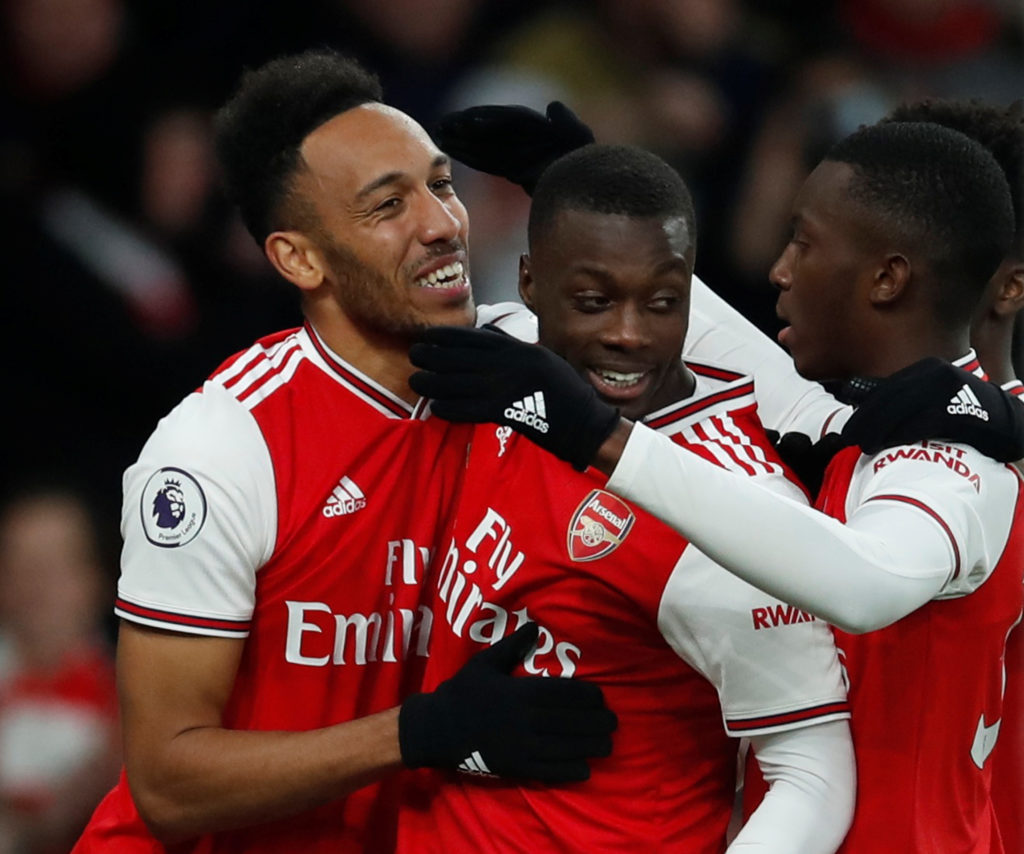 Arsenal do seem to be finding form, consistency and the ability to grind out a result, as shown against Everton, at the right time for their lovely run of fixtures.

With Arsenal now only four points behind Manchester United in fifth, it is all to play for in terms of UEFA Champions League qualification.

When an individual player has form, fixtures and motivation, I buy. The Gunners have all of those things and therefore maybe just one Arsenal asset isn’t enough.

Ahead of Gameweek 29, I’ll be bringing in Aubameyang, either in a swap with Roberto Firmino (£9.7m) to allow the Liverpool defensive double-up or to replace Jamie Vardy (£9.7m) if he blanks again against Norwich City on Friday.

However, Saka looks too good an opportunity to turn down, so I might line up a Cantwell to Saka transfer to give me an Arsenal double-up ahead of this favourable fixture run.

Sam Bonfield is a member of our Pro Pundits initiative, a team of Fantasy managers here to bring you regular advice and updates on their teams. Sam has served up two top 30k finishes in the last two seasons and is currently inside the top 1k in the world.