Today I wanted to recap on the initial picks the FPL Fantasy Points Against (FPA) metric threw up and how they have fared over the last few Gameweeks. From there we will see if we can identify any players between Gameweek 30 – 33 that might be worth considering.

To refresh your memory, the players picked to perform between Gameweek 25-29 were:

To quantify success over a four to five week period (including blanks), I would say we need to have had returns in at least 50% of the Gameweeks.

Success here would be any positive fantasy return whether that’s a clean sheet, goal or assist. For defenders, I’ve totaled all playing defenders scores for that Gameweek, then divided them by number of defenders playing. Any cameo appearance that meant a one pointer were not included. Let’s have a look at our tracker and see how the lads got on. 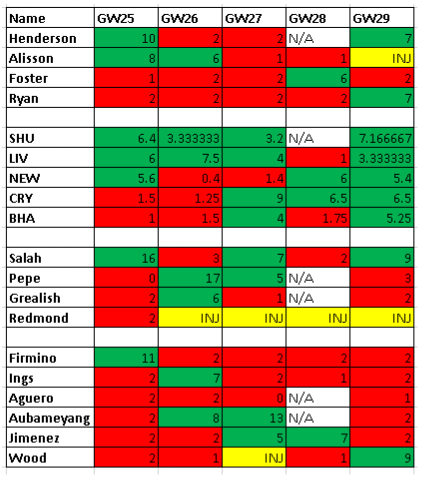 Both Henderson and Alisson came in with a 50% success rate, bringing returns in two of the four games they played in. Unfortunately, Ben Foster and Mat Ryan could only manage one return in five.

Sheffield United defenders returned every week in some way, shape or form. John Lundstram is still finding a way to be of use even though he appears to have lost his starting position! Liverpool also averaged a return in 80% of the Gameweeks, but have started to look a bit wobbly recently. Newcastle United and Crystal Palace both averaged a return in 60% of their games with Brighton only managing 40%.

Looking at Midfielders, we can see Mohammed Salah returned 60% of the time. The jewel in the crown here though, is Pépé. Based on the FPA numbers, we fancied him to produce and produce he did! A 17 point haul at Newcastle and an assist at Everton gave anyone that jumped on him a nice amount of points. Sadly, Jack Grealish could only produce one return and Nathan Redmond got injured after one week.

When it comes to forwards, we didn’t quite get the returns we hoped for. Injury halted Chris Wood (although he did score on his comeback) and Danny Ings seems to have been affected by the injury to Nathan Redmond as his form has disappeared. Sergio Aguero couldn’t manage a single return, with Roberto Firmino reverting to mean, missing a hat load of big chances and only returning once. Pierre-Emerick Aubameyang and Raul Jimenez being the only two to return more than once.

What does this tell us?

For me, these results show that using Fantasy Points Against as a metric does, in fact, generate results! As a metric that doesn’t appear to be used a lot in FPL, it could be a hidden gem. Take the Pépé punt for example, this article identified him as a punt before he was on the majority of FPL managers radars! That sort of thing is gold dust in a game where we are looking to outfox our fellow players chasing that coveted Fantasy Gold of a top 10,000 (or higher) finish. I’m not saying it’s fool proof, but any way of getting an upper hand on the competition has to be good, right?

With what has happened in Serie A and other sporting events there is clearly some uncertainty over future Gameweeks. Until we hear otherwise I’m still going to try and predict some picks for Gameweek 30-33.

Let’s have a look at the Fantasy Points Against (FPA) and Fantasy Points For (FPF) tables overall, home and away and the next four weeks fixture ticker.

Note – if you want a Keeper playing in 31 – check my Free Hit article out here.

Home/Away table for reference throughout: 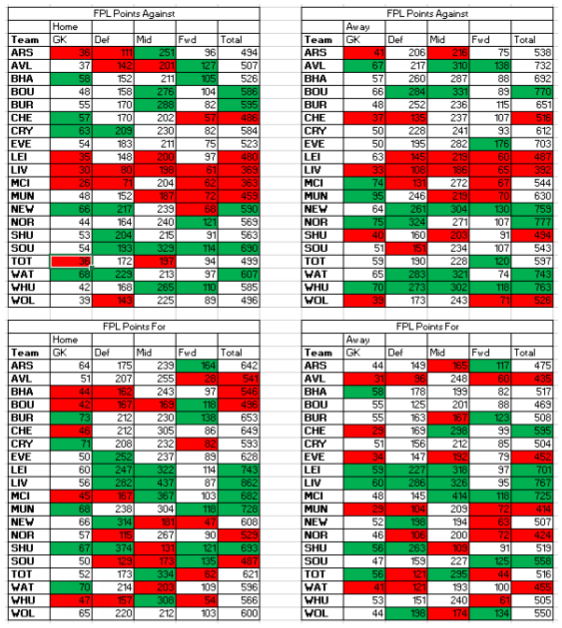 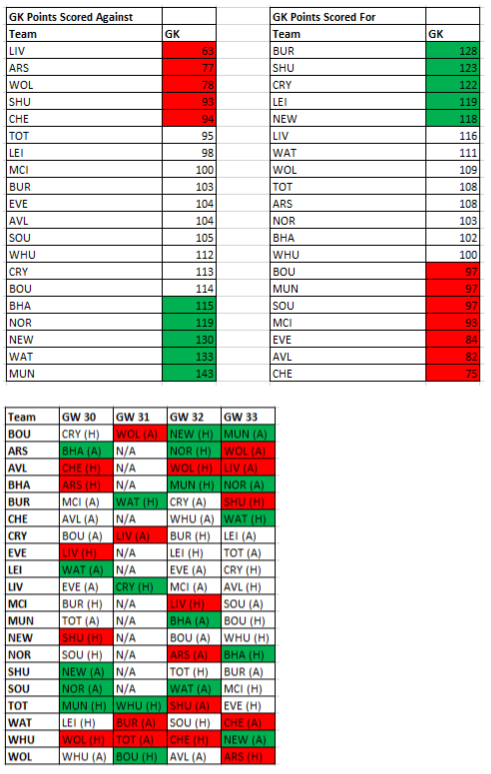 Honestly, not a lot to pick from here. Considering form of teams in addition to the metric, Keepers in these upcoming fixtures could be difficult to navigate.

Leicester are in the top five overall, away and just outside it for FPF. Schmeichel is a solid shout with Wilfred Ndidi back.

Arsenal are middling all over the park for FPF but I like their next two fixtures. 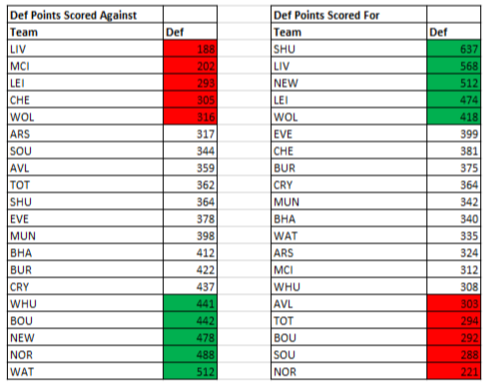 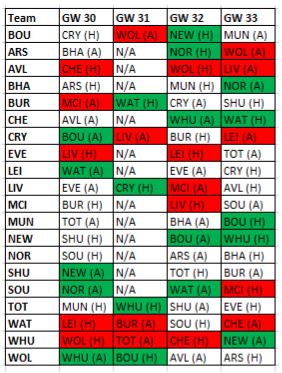 I’ve mentioned Wolves Defenders in both my Blank Gameweek Article (link) and Free Hit Article (link) so I won’t go into loads of detail on them here. Instead I’m going to look at Chelsea and Newcastle.

Chelsea are just outside the top five for FPF in defenders, middling both home and away. However, they’re in form and I fancy them to pick up some points over the next few.

Newcastle are in the top five overall, and both home and away for FPF scored by Defenders. 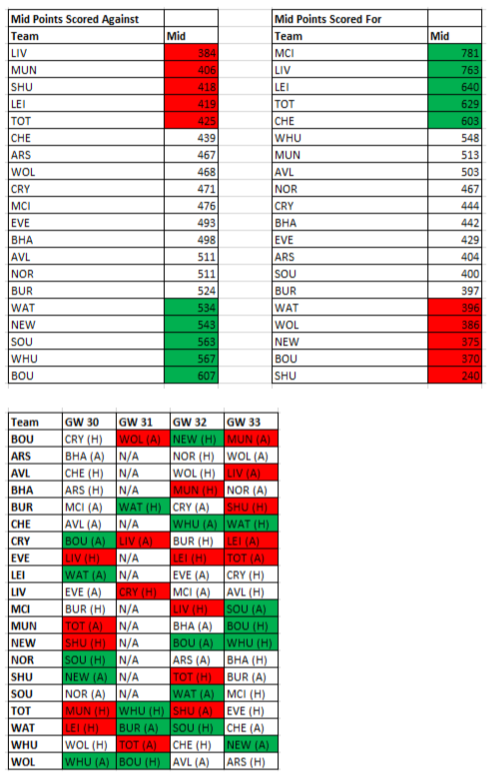 I’ve already mentioned the likes of Ismaila Sarr and Abdoulaye Doucoure in both my Blank Gameweek Article and Free Hit Article so I won’t go into loads of detail on them here. We’ll instead take a further look at Chelsea and Newcastle.

Chelsea are in the top five overall and when playing away, just outside it at home. The issue with Chelsea is rotation. The most likely starter is Mason Mount (£6.1m) but players like Willian (£6.9m) and Pedro (£6.8m) could be worth a shout.

Newcastle are in the bottom five for FPF scored by their Midfielders but we’re taking a punt here. The two I would consider are Jonjo Shelvey (£4.9m) and Allan Saint-Maximin (£5.4) as really nice differentials. 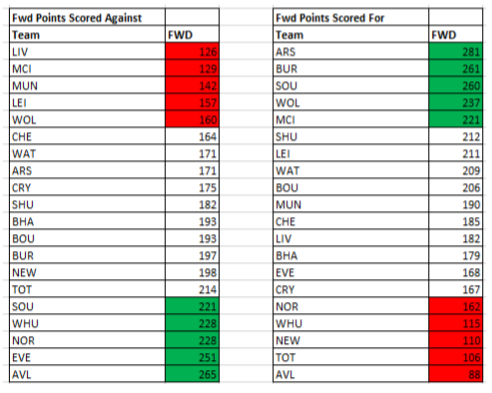 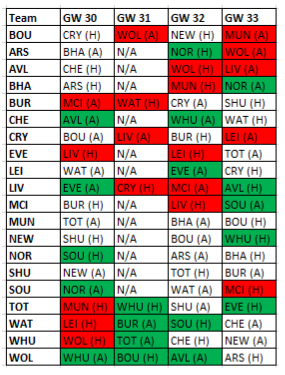 I’ve already mentioned the likes of Raul Jimenez, Diogo Jota and Troy Deeney in both my Blank Gameweek Article and Free Hit Article so I won’t go into loads of detail on them here.

Chelsea are middling across the board for FPF, but I’d strongly consider Olivier Giroud here, until Tammy Abraham is back.

Liverpool are middling everywhere for FPF scored by forwards. Hear me out! I know Firmino hasn’t been in the greatest form, but he scored tonight at home against Atletico Madrid, finally! This could open the floodgates and Liverpool’s sole focus is to now finish the season strongly, so I think Firmino could profit over these four fixtures.

So there we are – I’ve run the numbers over the initial picks and realised this can be a really useful metric! From there, I’ve tried to identify some good picks for the coming weeks. As always: use this as part of a well-balanced diet of numerous different statistics, rather than just using it as the holy grail. Let it help you make decisions or justify ideas, rather than placing all of your faith in it. It could be a very useful tool.