“Because I’ve had the time of my life. No, I never felt this way before. Yes, I swear it’s the truth. And I owe it all to you” 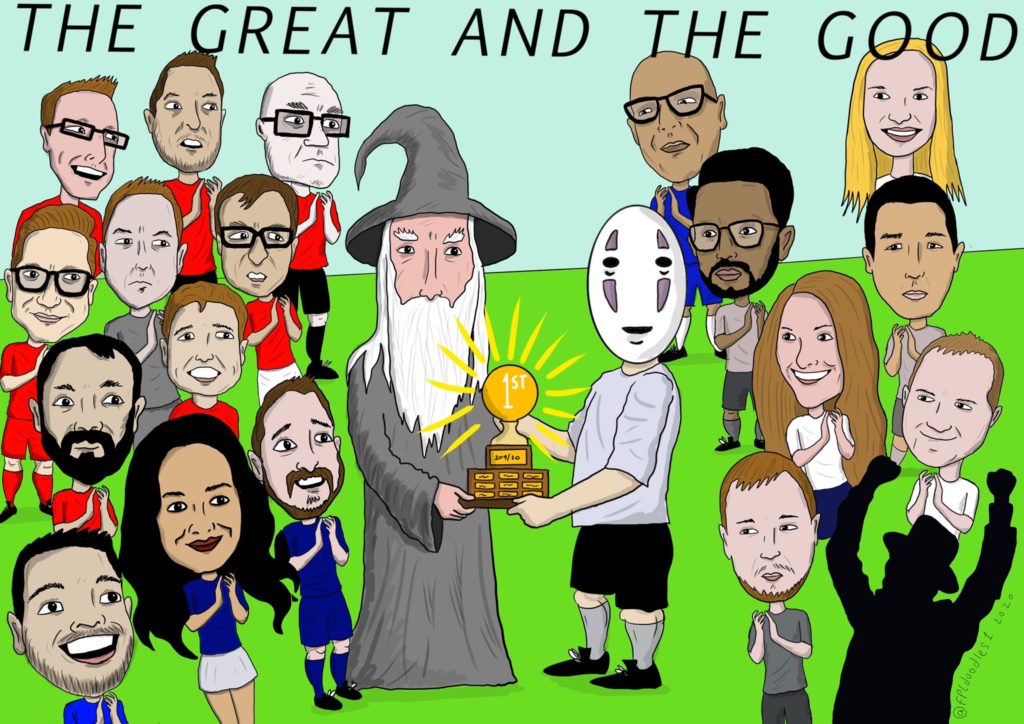 Welcome to The Great and The Good end of season awards, a celebration of the 2019/20 season, the one we thought may never end.

There is a star-studded list of guests attending this fictional gala event, with even Ville Ronka appearing from his fantasy cave before disappearing in a puff of smoke. A massive thank you to FPL Doodles for capturing the prize-giving ceremony.

The drinks are flowing, and some are looking worse for wear after Az ordered tequila for everyone, David is showing off his Lord Lundstram tattoo and Neale is doing his best Geordie dancer impression high kicking his way across the floor.

As a reminder, The Great and The Good are a handpicked group of FPL celebrities (?), FF Scouts or Pro Pundits who I will follow to see what we can learn as they navigate their way through the season. They are the Scouts (Mark, Joe, David, Geoff and Neale), Pro Pundits (Az, LTFPL Andy, FPL “celebrities” FPL General and Jules Breach) and finally, from the Hall of Fame, we have Ville Ronka, Matthew Jones and Sean Tobin.

So, the big one, who was the greatest of The Great and The Good? Last year’s winner Mark, still sulking over his final day Pulisic captaincy decision, opens the envelope to reveal Ville Ronka as this year’s champion.

Ville won by just eight points over a resurgent Az after a free hit to forget on the final day, he scored less than the weekly average of 60, but it was enough to see him crowned champion.

Mr Ronka had a strong second half of the season with fourteen green arrows during that period, he had a slow start and was at the million mark back in Gameweek 5, but he showed his class to finish just outside the top 10,000.

What’s interesting is that his return to form coincided with his resumption of his more conservative style, he took only one hit from Gameweek 14 compared to six in the first part of the season, maybe an indication that you need to stick to playing your own way.

The final day saw Sean Tobin outscore the rest with 81 thanks to a well-played wildcard with De Bruyne, Sterling and Aubameyang all starring for the Hall of Famer.

The final standings are below.

The next award goes to the manager who demonstrated Harry Redknapp like skills in the transfer market and the winner is David with 239 immediate transfer points. Please note I have removed the free hit scores from the total.

The results are somewhat distorted by the restart, he certainly made the most of the free transfers bringing in both De Bruyne and Mahrez in Gameweek 30+, but there is no doubt he showed an eye for a bargain throughout the season.

However, he was not immune to the last day panic as he was one of many who took a hit, it was minus eight in fact for Munday, to transfer out notable Liverpool benchings when the early team news broke.

Mark, Joe and Andy were the others to take a hit and it was further bad luck for Andy as his minus four included removing Kevin De Bruyne. The full final Gameweek transfers are below:-

Overall, Andy was the one to take the most hits over the season with twelve just edging out Mark and Az, this contrasts sharply with Matthew Jones who one took one minus four all season.

Picking the right captain proved tricky this year but Az was the strongest in this category with an average of 14.8 for the campaign. His armband choices post restart were extraordinary with Sterling in Gameweek 35 and 37 notable highlights.

Az was one of many to go with the Man City winger on Sunday afternoon, Mark gambled on Pulisic, Jules went sentimental with Silva and FPL General was one to go through a rollercoaster of emotions with Mahrez.

Over the season there were 26 different players who were handed the armband, showing that this was not a campaign to set and forget, but it was Salah who remained the most popular, picked 25% of the time by The Great and The Good.

The unique nature of this campaign meant multiple chip strategies were deployed, you only have to look at the final day as we saw five of them use their free hits whilst Sean used his Wildcard.

The winners in this category were Sean for his free hit in Gameweek 30 which saw him 35 points above the weekly average, Andy for his brave bench boost in Gameweek 27 which netted him 33 points and any of them who triple captained Salah back in Gameweek 24 rather than Mane, lest we forget.

In my mind at least, there is no doubt that Ville Ronka was the Wildcard wizard, when he played it in Gameweek 18 he was over 500,000 in the overall rankings but by doubling down on United fixtures he was inside the top 100,000 by Gameweek 23.

This year also saw the emergence of the Pro Pundits, giving me a chance to scout their performance for inclusion in The Great and The Good squad next season.

A summary of their season can be seen below:-

The standout performance was Lateriser12 who was 31st overall, an outstanding achievement in a challenging season. He championed a proactive style, along with a deep love for Aguero, taking 14 hits and scoring an impressive 258 immediate transfer points as a result of this upside chasing. Well played Sir!

He was not alone in having a strong campaign with both FPL Family Sam and Simon March finishing in the top 10,000, higher than any of The Great and The Good.

So, another season ends and what a season, which nobody could have predicted.

What have I learned this season? Well, Lateriser and Ronka have shown there is more than one way to be successful at this game, Az has highlighted that you should never give up with his remarkable recovery but most of all I’ve learned to just enjoy FPL, it’s a game that brings a global community together and that in itself should be celebrated.

Before I leave you in peace, I want to share my gratitude to Rotation’s Alter Ego for editing my ramblings, Geoff and the Scout team for allowing me to share my puns and ponderings, to The Great and The Good for letting me follow them on their journey plus poke a little fun at times and finally to anyone who has stumbled across these articles during the last year and shared a nice comment. Enjoy the break!

For those affected by any of the topics raised in the above article then you can find me on Twitter at https://twitter.com/Greyhead19