“Well I don’t know why I came here tonight; I got the feeling that something ain’t right, I’m so scared in case I fall off my chair, and I’m wondering how I’ll get down the stairs. Clowns to the left of me, jokers to the right, here I am. Stuck in the middle with you”

Take a hit, hold tight, wildcard! A bloody earful of advice, opinion and debate as we entered Gameweek 2 with some of us stuck in the middle as to what we should do.

Many advocated an aggressive hit-based approach to take advantage of the delayed start for United, City and move away from the evolving Spurs soap opera, but there was a plot twist in that drama.

Others suggested a more cautious approach to give us chance to see if the likes of the resurgent Everton were the real deal, one suspects that trepidation has now passed as Calvert-Lewin hit a hat-trick.

A number went all in and threw in their wildcard, like Scoutcast legend Granville, Canadian Kingpin Geoff Dance, winner of Championship Manager FPL Luke Williams and stat man himself FPL Wire’s BigManBakar aka TFF. The latter scored a fantastic 82 points moving him up to 117,000.

So, how did the Reservoir Dogs of the FPL world The Great and The Good plot their first step and did they prove to be jokers or clowns?

For those not familiar with the series The Great and The Good are a select group of prominent FPL managers made up of FF Scouts, Pro Pundits, Celebrities and Hall of Famers who I follow during the season to see what I can learn in order to improve my fortunes.

A criminally bad week for most of the managers with seven of them below the overall average of 59, Fabio and Magnus were the most successful with their weekly heist gaining them 73 points.

Neale and Fabio were in the pink as they were the only Son owners with the other successful managers having a combination of Calvert-Lewin, James Rodríguez and Mitrovic to thank for their above average weeks.

I won’t dwell too much at the bottom end of the table but plenty had a difficult weekend with the average rank change amongst this group a drop of a million places, so if you had a challenging weekend then you were not alone.

The captain call was looking to be a boring affair with everyone expected to go Aubameyang but Lateriser then gambled, going heart over head, by putting his armband on Martial, I suspect he will have better picks this season.

This is a summary of the transfers for this week :

The transfers reflect the split in the community prior to Gameweek 2 with five holding their nerve whilst the Blackbox duo of Mark and Az took hits.

Tom, FPL General and Magnus were rewarded for bringing in James/Hamez/Rodríguez, but whichever way you address him the Everton midfielder looks a canny buy.

There were some less successful moves, Az had to suffer as Ings threw his minus four back in his face as he scored whilst his recruit Martial failed to deliver.

Yet, most of your sympathy should be with Ville Ronka who sold Son for Rashford, which could be considered a mistake or more appropriately just plain bad luck, as the Spurs midfielder hit four goals against Southampton.

The template for The Great and The Good is as follows with number in brackets showing how many teams in which they appear:-

No major changes this week with only Martial joining the squad competing with Adams for the 3rd striker spot, his appearance could be short-lived unless he performs against Brighton. Will the gloves be off this time?

One method of gaining a little success is to double or triple down on a team either with good fixtures or pedigree. So, I was interested to see which teams The Great and The Good has focused their attention on at the start of the season.

The table below gives the number of players from the Premier League squads, bear in mind the maximum number would be 36 (12 teams in The Great and The Good x maximum of 3 players):- 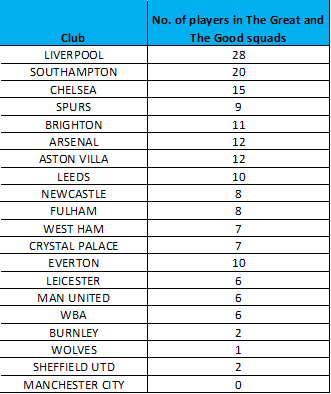 No surprise to see Liverpool dominate with only Lateriser from these managers not doubling up and many of them tripling up on their players, the tricky part is which three to pick with Mane reminding us of his quality over the weekend.

Sterling and De Bruyne will no doubt be joining several squads this week but at present, there are no City players in any of the teams. Would also fancy a few more Wolves to be added to the pack this week with a howling set of fixtures ahead, Jiménez and Podence are ones I have my eye on.

To make room for these new additions I can see Southampton players being moved on, they were heavily tipped to have a breakthrough season with some good early fixtures but their high defensive line was cruelly exposed by Son and turned many a Saint into a sinner.

Fascinating to see so much faith put in the newly promoted teams, as conventional wisdom would suggest steering clear of unproven talent at the start of the campaign. Whilst it looks like goals could be plentiful in any game involving Fulham, Leeds and West Brom it would look like any clean sheets from their backline will be a rare occurrence.

A dramatic weekend of FPL with next few days promising major price fluctuations and a little chaos as many of us try to catch up.

I can see panic buying of Son or Calvert-Lewin plus heavy investment in Wolves and maybe even a wildcard or two, with 0.1 drop feeling like 0.5 at this early stage.

My counsel would be to keep a calm head and try to remember your golden rules of patience announced by so many of us before the season began, but most of all enjoy it as riding the FPL rollercoaster is all about relishing all the twists and turns that this game brings.

Finally, just to provide an update on the Community team that will be featured in upcoming articles over the international breaks, first thank you for a great (and good) response – you certainly are a creative bunch.

After much deliberation, well not that much, decision-making was more of the blindfolded dart-throwing variety I have selected the following:

Sorry to those who didn’t get in this time, your details have been kept on file and in some cases handed over to the appropriate authorities and will look to do something similar next season. Thank you again for all the love, it was very touching and the first article on the Community team will be in a couple of weeks’ time.

For those effected by any of the topics raised in the above article then you can find me on Twitter at https://twitter.com/Greyhead19