“So, the winner takes it all

And the loser has to fall”

FPL is Bjorn again! There were some huge scores posted around the community as the super troupers of Kane and Son hit double digits and Werner finally scored thanks to the infamous Southampton high line.

Elsewhere, injuries to Van Dijk and De Bruyne look serious enough to cause disruption to the title race as well as the world of FPL. Mama Mia!

The name of the game was Wildcards for a couple of The Great and The Good as Magnus Carlsen and Az both decided they had no more ace to play, it remains to be seen whether the winner takes it all but certainly, the Chess Grandmaster will be pleased with initial results.

The Great and The Good are the Scouts Neale Rigg and Joe Lepper, Pro Pundits (Mark Sutherns, Az, Lateriser, Fabio Borges and Tom Freeman ), FPL “celebrities”, FPL General,  Magnus Carlsen and finally from the Hall of Fame we have Ville Ronka, Matthew Jones and Sean Tobin

There was something in the air this gameweek with a flood of green arrows, in fact four of the managers achieved rises of over 1 million places.

Lateriser was the top performer with 91 points and he didn’t have any Spurs attackers, his massive 1.8 million green arrow was based on Werner, Sterling, Martinez and Jimenez contribution.

There were successful Wildcards for Az and Magnus which saw them with 80+ points, a Kane captaincy meant Joe and Sean also had reason to celebrate but Fabio remains top of the charts despite a relatively disappointing week for the Portuguese maestro.

Meanwhile, Neale can see his rank slipping through his fingers with 55 points but with 5.4 million in the bank he has the funds to make a swift recovery.

Ain’t no big decision when it came to armband choice this week as all of the picks said yes to the question, voulez vous provide captaincy returns?

The majority went for one of the Spurs dynamic duo with Kane providing the biggest score for Magnus, FPL General, Sean and Joe. Only one of us was brave enough to back Werner and Lateriser’s gamble paid off as he equalled Harry with a 32-point haul.

Friday night and the lights were low as Az raised a last-minute SOS and effectively crowdsourced his Wildcard decisions on a special end of week edition of his Black Box podcast.

Mark was on hand to play mind games and Let’s Talk FPL Andy aka Mr Slippers changed out of his dressing gown to talk Az down from including Bruno Fernandes. Andy later revealed his own Wildcard which saw him on 83 points for the week and move up to 204,000.

The full details of his moves are below:-

Az remained resolute in his decision not to bring in Kane, keeping faith in Werner instead, but knowing me, knowing Az there may be a pang of regret at moving out Havertz, who at one stage was going to be his captain.

Son, Grealish and Lamptey are sensible moves plus he has a couple of differentials in Pulisic and Maupay, both under 10% ownership, who could help him get ahead of the curve when all the pretty birds have flown.

Magnus was the other manager to play his chip and it was gimme gimme gimme a Spurs attacker as he doubled up on Son and Kane.

Angel eyes Martinez looks to be this year’s Pope and is worthy of inclusion plus Magnus appears to have enough faith in Chilwell’s attacking form to find him a place, although you would think his chances of clean sheets will be dependent on Mendy’s return from the sidelines.

He has moved to 3-5-2, with two 4.0 defenders in Mitchell, Kilman and is the second manager to say this is where the story ends for Alexander-Arnold following Ville Ronka’s example and moving the previous essential Liverpool defender out of his squad to free up funds in attack.

The full ins and outs are below:-

This is a summary of the transfers for this week :

The transfers this week were dominated by the search for a De Bruyne replacement with Son the most popular choice, although Neale and Fabio listened to Jack Grealish’s pleas to take a chance on me as they brought in the Villa playmaker, shame Southgate didn’t do the same.

This move for Grealish looks to suggest Fabio will shift away from his 4-3-3 to a 3-4-3 with money in the bank to upgrade one of his 4.5 midfielders, interesting to note his Robertson transfer means he has moved to a Liverpool defensive double up. Will he keep faith with this strategy after news of the Van Dijk injury?

Elsewhere, there were plenty of hits with Mark continuing his run of taking one a week and his cavalier approach seems to be rubbing off on the more conservative managers with Joe, Matthew Jones and Ville Ronka going for a minus four.

The template for The Great and The Good is as follows with the number in brackets showing how many teams in which they appear:-

The template has solidified this week, it was De Bruyne’s Waterloo as he has been replaced by Son, whilst Grealish and Soucek join him in midfield.

Our resident maverick Joe is the only one to be without Salah and if the template changes its mind, I can see Kane and James Rodriguez being first in line for a place in the squad over the coming weeks.

The table below gives a summary of transfers, captaincy performance over the season and team value :- 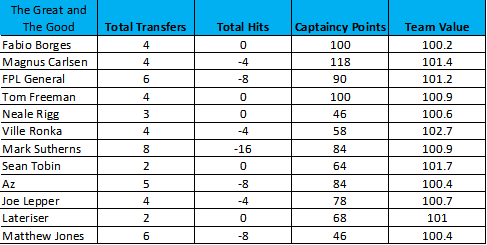 As mentioned, Mark is a transfer Tiger taking an aggressive start to the season having made eight moves and four hits already.

A more cautious approach is being adopted by Tom, Fabio and Neale who have yet to take a minus four and have their Wildcards intact.

Magnus is the dancing queen of captaincy points, averaging 23.6 so far, he along with Fabio and Tom have not had a blank armband. The difference in captain scores between the top and bottom is 72 points which underlines the significance of picking the right captain during a chaotic few weeks.

Money, money, money appears to be Ville Ronka’s mantra with a significant gap appearing amongst the managers’ team values, his squad sitting at 102.7 which is 2.5 million more than Fabio’s.

Is the Fin chasing value? His Wildcard back in Gameweek 3 saw him bring in Calvert-Lewin and James Rodriguez who have been two of the biggest risers so far. Taking an upper hand in these early season fluctuations could give him an edge towards the end of the season.

FPL General has the best team value of those yet to Wildcard at 101.2 and Az has commented that one of the advantages of his overhaul was the honey, honey value he gained in price changes. I wonder whether this will drive any more of The Great and The Good to press the button in the next couple of weeks?

Five weeks in and we are in a season like no other where due to the huge number of options, we must accept significant opportunity cost in every transfer we make.

Laying all your love on one opportunity e.g. double Spurs attack will mean foregoing another one e.g. Sterling, Mane, Aguero.

My advice is to ignore opportunity costs, don’t be tempted to think what might have been or else you face the danger of being paralyzed by inaction and not moving forward.

Anyway, that’s all from me for now, thank you for the music and remember don’t have nightmares.

For those affected by any of the topics raised in the above article then you can find me on Twitter at https://twitter.com/Greyhead19