With the international break almost over, the Sorare Academy is back for another Gameweek with 10 amazing prizes on offer to the winners.

The last Gameweek featured an amazing 2,300 unique players and 10 of them took home cards to boost their collections.

In the first two weeks, we’ve given out 20 cards including:

A reminder that it’s completely free to play in the weekly Academy game. If you enjoy it, you can consider buying some Sorare cards to build your team for the main Sorare Tournament (“SO5”), if you so wish.

Head over to Sorare Academy to start building your team.

All the instructions are there – just click on the empty slot in your team, then the player you want to pick.

You can pick stars from across all these leagues where a Sorare card exists. As Sorare cards are officially licensed by the clubs, not everyone is available yet – although this is rapidly changing. Recently La Liga and the Bundesliga signed a rights deal with Sorare and the EPL licences are being worked on. But we can already pick plenty of EPL stars, including from Liverpool!

Don’t tell anyone but I have a secret tool over on my website to help with fixtures across the big five Leagues in Europe, an aid that will be integrated into the Academy site soon.

These numbers come from an algorithm and it’s sorted by the likelihood of the team winning their next fixture. I’ll be going for the ‘flat tracks’ – there’s no need to make life harder than it needs to be!

Manchester City look juicy, then, and using the filters on the Academy team select, I can see that only a few City cards are yet available. Fortunately, there are a couple of gems: Kevin De Bruyne and Ruben Dias.

PSG and Liverpool will be spicy picks too. There’s much more choice here, with full squads available.

Napoli, Barcelona, AC Milan and Real Madrid also offer great options this week with soft fixtures but we may want at least one differential, so hunting at some of the slightly less popular clubs like Real Sociedad or Atalanta might be a good idea.

On Sorare, the basic scoring is simple – our primary source of points will be from our goalkeepers and defenders keeping clean sheets, and from our midfielders and forwards scoring goals. That’s enough knowledge to pick a basic team in a free tournament with but there is a lot more to mastering the scoring system than that.

On Sorare, the players’ overall contribution to the game is important too. If you can find players who do all the above yet also tend to see a lot of the ball, make a lot of accurate passes, create big chances, get shots on target, or make a defensive nuisance of themselves with blocks, tackles and interceptions and duels, you’ll likely get an edge.

As a lazy shortcut, think of how much influence Lionel Messi has on the overall game in addition to his assists and goal threat – that’s the sort of thing we are looking for.

There are more details on the scoring system here.

The Academy will give us quick access to information about the players’ previous form. 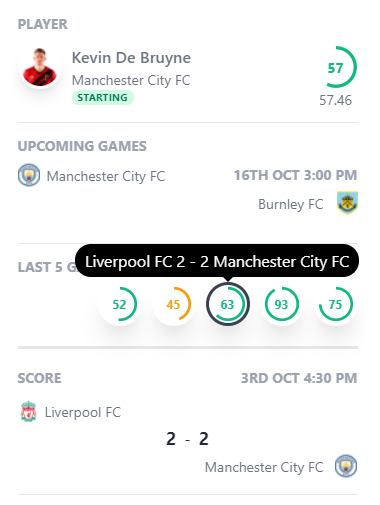 Likewise, Salah is on fire and is averaging 79 in his last five matches. Alternatively, though, youngster Curtis Jones scores very well on Sorare due to his all-round contribution. Sadio Mané is not too shabby either, as you would expect.

PSG come out well on the algorithm but it is worth noting that they will be weakened by internationals with Lionel Messi, Neymar, Angel Di Maria and Marquinhos all absent. I’ll take a punt on that giving Kylian Mbappe a chance to shine. Alternatively, for a bit of a differential, I could go for Sociedad’s Mikel Oyarzabal, if he looks set to be passed fit.

AC Milan have been tight at the back recently, so we could welcome in Theo Hernandez, who may pick up a clean sheet but who also has plenty of threat and creativity to boost his score, with one goal and three assists in the previous three appearances for him for club and country. We could also go for Virgil van Dijk at Liverpool or even punt on Sergio Ramos, who may well make his PSG debut.

Between the sticks we could go for Jan Oblak because Atletico are as tight at the back as ever and Granada are soft opponents. Alisson would be a good alternative; Watford may get that new manager bounce but they have been one of the weakest attacks across Europe this season when we look at xG. They’d likely have to improve a lot or get lucky to breach Liverpool.

Here is my final team on behalf of the Academy, with De Bruyne getting the armband. What happens if I win?! It’s never happened before, so who knows! But I imagine the card will be raffled off on social media. Speaking of which, do follow us on Twitter for regular giveaways – including a huge one this week.

Enter your team right now for free – just make sure not to miss the earlier-than-usual 11am Friday deadline.

Good luck with your teams!