Big decisions lie ahead. The route to the double Gameweek seemed so clear last week with Alli’s poor form and a long-term injury to Kane making it easy to say goodbye to our Spurs players with United, Chelsea and maybe even City assets next on our list of farewells as we say hello to the Liverpool triple and maybe a Hammer or two.

Yet, as always FPL didn’t play fair and a Rashford brace, a goal from Firmino and City Sunday super show made us question again who we would be saying hello to and who we would have to wave goodbye to over the next couple of weeks.

Then there was the welcome wagon needed for those without Ings and don’t get me started on Aguerooooooo!

As a reminder The Great and The Good are a handpicked group of FPL celebrities (?), FF Scouts or Pro Pundits who I will follow to see what we can learn as they navigate their way through the season. They are the Scouts (Mark, Joe, David, Geoff and Neale), FPL “celebrities” (Az, LTFPL Andy, FPL General and Jules Breach) and finally from the Hall of Fame we have Ville Ronka, Matthew Jones and Sean Tobin.

The battle for The Great and The Good wooden spoon is heating up with David dragging himself off bottom spot with 75 points this week with ten of his players contributing to a strong performance. De Bruyne gave him valuable captain points but it was his differential picks of Sarr and in particular Richarlison that paid off and saw him move up over 200,000 places overall.

Neale still sits at the top of the mountain, but Ville Ronka and Az are making up ground fast, both with six green arrows in a row and having made up 25 points plus on the leader since Gameweek 17. Joe is sitting uncomfortably in second with only 12 points between him and Ville, the Finnish enigma has truly shown the power of a well-played wildcard.

As for captain choice this week, the majority of The Great and The Good stuck with either Vardy or De Bruyne for the armband but Mark saw an opportunity and transferred in and captained Jimenez – this gamble didn’t pay off!

This is a summary of the transfers for this week:

The transfers this week did not exactly scream excitement with three goalkeeping moves but whilst Joe went double dullard with his McGovern move it prove more fortunate than the arrival of Fabianski into Andy and Az’s squads.

David did his best to spice things up with the arrival of an Arsenal defender and a Watford midfielder, who would have predicted that a few weeks ago, although Sarr was unlucky just to get an assist and looks a good move for those who take more than a casual glance at his recent stats.

Elsewhere, Calvert-Lewin made an appearance in Sean Tobin’s fifteen as did Robertson and he is the first of The Great and The Good to commit himself to a double Liverpool defence, with his pedigree that certainly makes this writer take notice.

The template for The Great and The Good looks like this:

*brackets show number of teams they appear in

The template is suffering from a goalkeeping crisis with five now been considered but this will quickly reduce to four after Fabianski’s injury Somewhat surprisingly, it seems no one is considering McCarthy or Leno at this stage.

Meanwhile, in midfield Alli walks away and we are left deciding over Mane and Traore with much being dependent on our squad set up for the double Gameweek.

The latest Meet the Manager with Lateriser12, it’s excellent by the way, reminded me that we had not paid a visit to the Pro Pundits for a while, they are FPL Hints, Simon March, Tom Freeman, Sam Bonfield, Holly Shand, Zophar, Luke and Lateriser.

The table below gives a view of their performance and transfers when compared against The Great and The Good:- 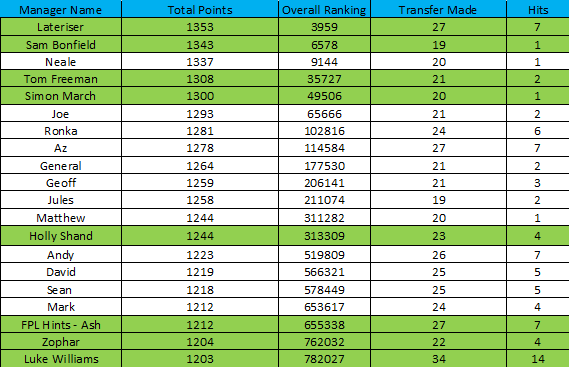 Lateriser12 has had quite the week with his well-published upside chase on Aguero paying off in some style as he transferred out Vardy for the Argentine, earning him 93 points and this now sees him top the overall table. His seeking out of opportunity is reflected in his immediate returns on transfers which sits at a whooping 122 points!

Overall, the Pro Pundits are putting pressure on The Great and The Good with four of the top five positions from this group, Sam Bonfield can count herself unlucky to be knocked off top spot as she has not fallen out of the top 30,000 since Gameweek 8.

Luke has slowed down with his hits, only three taken since Gameweek 12, but leads the way in total transfers along with overall team value with a squad worth 106.6, this even puts the Canadian kingpin Geoff to shame at a mere 106.2.

Simon March has had a strong run and is the top scorer between Gameweek 12 and 22 amongst the Pundits, he was an early adopter of Ings back then (before it was cool) and this purchase plus his captain pick 13.4 average see him in the top 50,000.

Holly Shand has made the greatest recovery having gained over 400,000 places during the last ten weeks, she took two well calculated mini-wildcards, one in Gameweek 13, which saw Jimenez, Maddison arrive and the other in Gameweek 17 which saw Rashford, Alli join her squad. These moves have sent her flying up the ranks after a slow start.

Lots of movement this week as plenty spotted opportunities to move up the ranks, some were good as in Lateriser with Aguero and some were not so good as in Mark with Jimenez.

Coming out of this Gameweek there are more options available to climb the rankings whether that be the returning Aguero, the rejuvenated Rashford, inspired Ings, majestic Mahrez or even coiffured Cantwell versus the whipping boys at Bournemouth.

However, some of these moves may influence our triple Liverpool plans for double Gameweek 24, so are these opportunities or threats? Is it hello or goodbye for The Great and The Good, only time will tell?

To misquote Paul McCartney, “the answer to FPL is simple. It’s a game about everything and nothing … If you have black you have to have white. That’s the amazing thing about FPL”.

For those effected by any of the topics raised in the above article they can find me on Twitter at https://twitter.com/Greyhead19

Likewise, if you want to keep up with the Tweets of The Great and The Good you can find them here