Let’s Talk FPL’s Andy reflects on another Gameweek to forget in his latest Pro Pundits piece.

Two weeks ago I scored 25 points in Fantasy Premier League. In my article I wrote: “It’s unlikely I’ll have a worse Gameweek all season”. 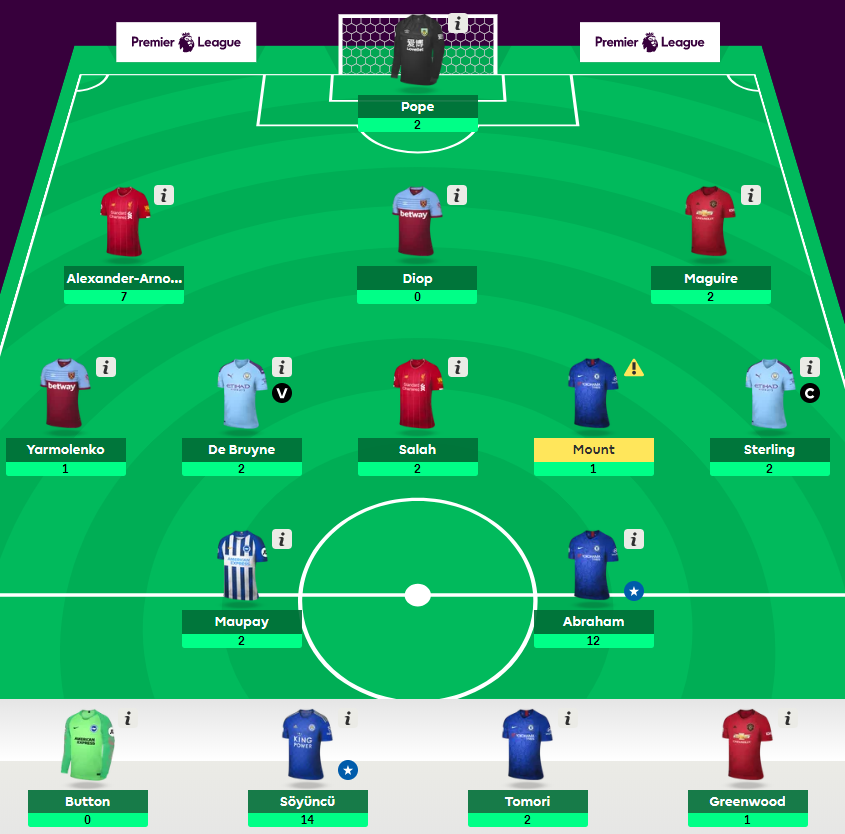 My transfer was Nicolás Otamendi (£5.3m) to Harry Maguire (£5.4m). I don’t think many people were looking to bring in Manchester United defenders but I liked the look of the underlying defensive team stats, the next four fixtures and the potential for attacking returns. In hindsight I should have considered the fact that Man United don’t possess a player that can successfully deliver a ball into the box. Attacking returns look unlikely.

Tammy Abraham (£7.9m) was one bright spark. It feels as though the whole community is talking about Jamie Vardy (£9.4m) as a captain for Gameweek 12 but Abraham is only seven points behind the Leicester striker, with 175 fewer minutes played.

Trent Alexander-Arnold (£7.2m) was the only other player I owned that didn’t blank. He did what he’s done all season: delivered attacking returns, but without a clean sheet. I’m just trying to imagine the huge scores once the clean sheets come.

When I look at my team for Gameweek 12 I don’t like what I see. 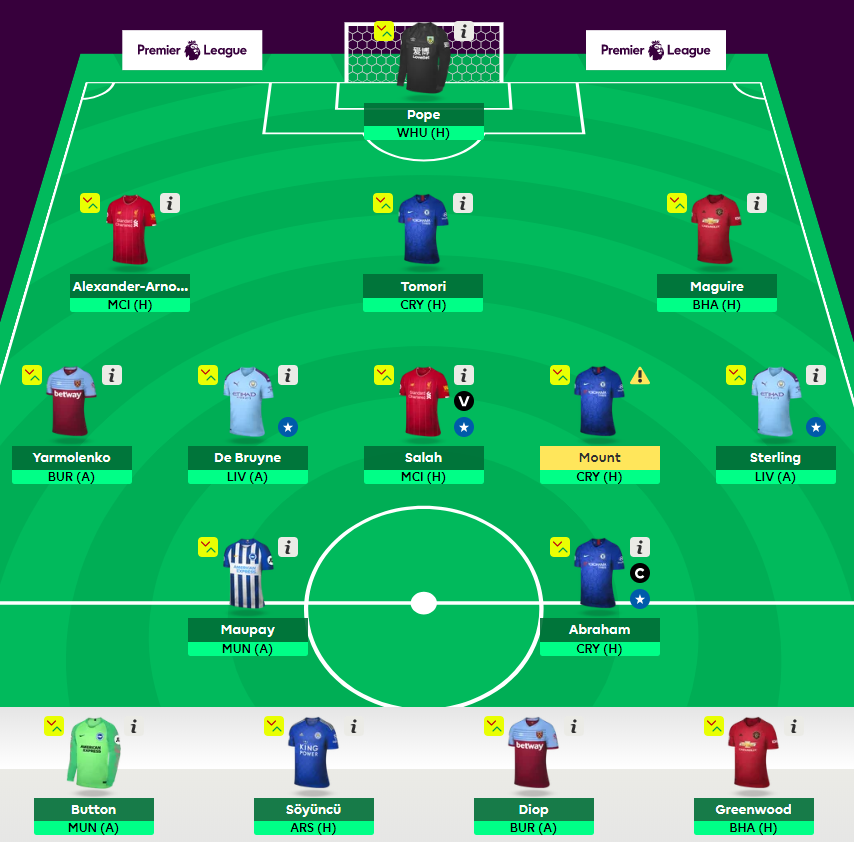 I own too many players I want to get rid of, and not enough players I want for longer term. I feel like I’m behind on transfers already, and if I just look to patch the side up each week I’m going to be behind for some time to come.

Trying to be critical of my decisions so far this season, I’d say I’ve made too many short-term transfers. There was Kevin De Bruyne (£10.2m) to Son Heung-min (£9.6m), knowing I’d want the Belgian back as soon as he was fit. While I feel a bit unlucky not to have gotten points from Neal Maupay (£6.1m) this weekend, he was another player brought in knowing I’d want rid of him just two weeks later because of the fixtures.

That’s why I’m looking at taking my second points hit of the season and making it a -8. I want players I can potentially hold for six to eight Gameweeks so I can “reset” my team and not be forced to chase but instead can look for new opportunities over the next few weeks.

I’ve also got to look at priorities. Lundstram looks almost essential but ahead of a run against Tottenham Hotspur, Manchester United and Wolverhampton Wanderers, I’m hoping the points will slow down before I have a spare transfer to use on him.

Looking at the Season Ticker in the Members Area, the fixtures for Leicester and Wolves over the next six to seven Gameweeks look great.

Raúl Jiménez (£7.2m) and Vardy have everything you could want from an FPL point of view: nailed-on, form, fixtures and penalties.

Vardy is already highly owned and rising, but Jiménez is owned by 11.8% and dare I say it, still a bit of a differential?

They’re both picks you can rely on, and hopefully won’t give me needless headaches in the coming weeks.

We talk a lot about the underlying statistics and that Vardy can’t sustain them but the man is clinical, gets plenty of big chances and takes most of his shots in the box. My new front three would be Abraham, Vardy and Jiménez and, as you can see from the last four Gameweeks, that looks promising.

The tough decision for me is how to fund this move. A switch from a 3-5-2 formation to 3-4-3 requires three transfers and a lot of cash. It’s why I’m looking at removing Raheem Sterling (£12.1m).

It’s not an easy decision for me as I like the security blanket a player like Sterling provides and I’m certainly not taking him out thinking he’s not going to score plenty of points this season. If you look at the last four Gameweeks, he’s still getting plenty of chances and creating them, with an expected goal involvement (xGI) of around 3.4 over the last four Gameweeks.

The top reason I’m looking at making this move is captaincy. I don’t see me wanting to captain a Manchester City player until Gameweek 20, and even then Vardy plays West Ham and Liverpool face Wolves.

Instead of keeping one player at £12.1m who I won’t captain, I’d be spreading the funds to more value players, and also players who could be genuine captain options in the coming weeks.

With Liverpool’s fixtures looking extremely appetising over the Christmas period, a permanent Sadio Mane (£12m) captain could be ideal. Mohamed Salah (£12.3m) will have to show some serious form against Manchester City and Crystal Palace for me to not remove him in the next couple of weeks. The strategy would be to have one premium player who I can look to captain most weeks, with value players elsewhere. From there it’s just crossed fingers.

Captaincy this week however is going to be much more interesting and I’m looking away from Liverpool and Man City players. While it could be an open game, it also has the makings of a tight affair with Liverpool not wanting to lose their six-point lead and Man City not wanting to be nine points behind this early in the season.

If I bring in Jiménez and Vardy, then my front three are all contenders. Despite Aston Villa being middle of the road in terms of goals conceded they are still conceding a lot of shots in the box, the most over the last four Gameweeks with Palace a close second. That makes the Mexican a shrewd differential choice.

I think it’s very close between Vardy and Abraham: they’re posting good numbers, both are in good form and playing for teams scoring plenty of goals. The potential advantage for Vardy is that Arsenal are unlikely to either want to sit deep and defend or be able to, so that should leave space in behind. We saw against Crystal Palace some fantastic through-balls from James Maddison (£7.4m) and Youri Tielemans (£6.5m) which nearly had Vardy through on goal and I’m expecting to witness more of that on Saturday.

Choosing Abraham certainly isn’t a bad decision this week, but there’s something enticing about Vardy and that’s likely where I’ll place my armband.

I can’t help but wonder as I finish writing this if in two weeks time I’ll be back, wondering how I can get Sterling back in.