One of the world’s best FPL managers, Tom Freeman, takes a closer look at Wolves’ resurgence in his latest Pro Pundits piece.

When I started writing these fortnightly articles, as part of the Pro Pundits initiative, my aim was to talk about broader topics than simply my own team. I wanted to use this platform to raise discussion, from differentials who are maybe going under the radar to tactical aspects, ideas and strategies.

With this in mind, I’ve used the international break to take a closer look at Wolverhampton Wanderers, who after a slow start in which they picked up just three points from the first five games, have now gone seven without defeat in the league.

Last month, I talked about a lack of creativity throughout the team, but a decision to revert to a 3-4-3 shape in recent weeks has seen them increase their attacking threat.

Here we can see the average positions from their recent win over Aston Villa:

Using this 3-4-3 shape, they are now creating more chances, and shooting more often. In fact, over the last two Gameweeks only Manchester City have attempted more shots.

An important aspect to this system is that it allows two of their best performers this season, Adama Traoré (£5.2m) and Matt Doherty (£6.0m), to start. What we’ve often seen is Traoré staying wider, whilst Doherty has moved inside and into goalscoring positions. Indeed, 45% of Wolves attacks came from that right side versus Aston Villa.

Again, focusing on the last two Gameweeks, Doherty has had more penalty area touches than any other defender, and sits third for shots in the box:

The hope is that Wolves continue with a more proactive approach and take this into their forthcoming run of games against Bournemouth, Sheffield United, West Ham United, and more importantly in an otherwise tricky Gameweek 18, Norwich City.

The news of Mauricio Pochettino’s sacking literally filtered through as we were about to go on air on this week’s Scoutcast. It’s fair to say that it caught me off-guard. Now I’ve had time to reflect, I wanted to include a few thoughts here.

Firstly, I think it’s felt like the end of the road for Pochettino for a while now – 18 defeats in 2019 tells its own story.

Despite this, it shouldn’t take away from what a fantastic job he has done at Tottenham Hotspur. He’s transformed the club and raised expectations despite restrictions, and that should be applauded.

I think we all know how it’ll end for José Mourinho at Spurs, but it’s going to be interesting.

Moving onto my own team, this is how we currently line up, with two free transfers and £0.3m in the bank. 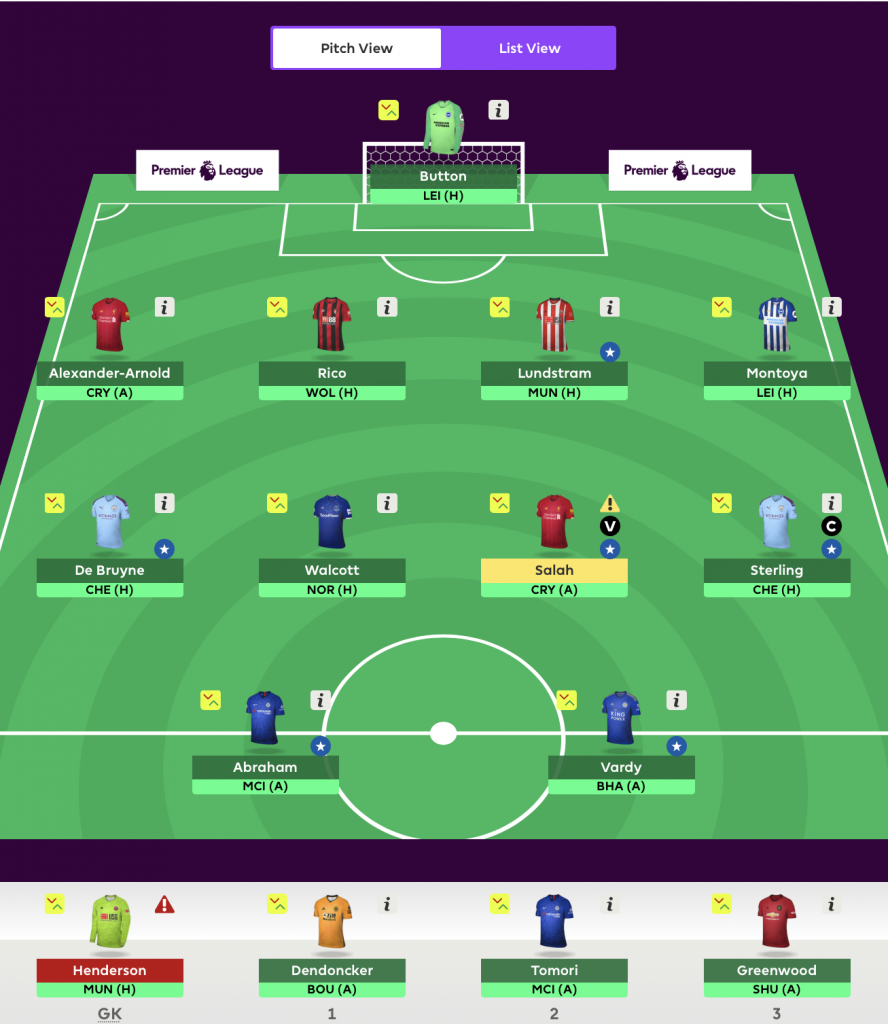 I’ll likely go into Gameweek 13 without a playing goalkeeper. Rather than repeat myself here, my thoughts on this can be heard on this week’s Scoutcast or on my recent Meet the Manager video.

A double move for Çaglar Söyüncü (£4.9m) and Sadio Mané (£12.1m) is under consideration, which would involve removing Martín Montoya (£4.5m) and Mohamed Salah (£12.3m) – but more information is needed re the latter’s ongoing ankle issue before a decision is made.

I’ll also be keeping a close eye on events at the Emirates, with an idea to bring in one of Southampton’s midfielders as a Theo Walcott (£6.2m) replacement ahead of Gameweek 14, to try and capitalise on back-to-back home games with Watford and Norwich City.

In terms of captaincy, I’m currently on Raheem Sterling (£12.0m).

Chelsea have conceded 12 goals in six on the road so far this season and when you realise they’ve played Norwich, Southampton, Watford, Burnley, Wolves and Manchester United, it looks even worse.

Add to that Manchester City’s 19 goals in six home games, and I think Sterling is the standout candidate for me this week.

You can vote for Fantasy Football Scout as ‘Online Media of the Year’ by CLICKING HERE.