Following on from Sam’s article that predominantly focused on premium forwards, one of the world’s best FPL managers, Tom Freeman, looks at the cut-price options available in attack.

In recent times, Fantasy managers have been able to call upon a large pool of reliable, kindly priced forwards.

Whilst back in 2017/18, only two forwards priced £7.0m or below at the start of the campaign reached double figures for goals, last season, we were treated to 12.

Raúl Jiménez (£7.7m) was the standout candidate. Starting at £5.5m and ending at £6.9m, the Wolverhampton Wanderers forward returned 181 points in his debut season, with 13 goals and ten assists.

The issue for Maupay owners is his last goal arrived in mid-December. I think it’s fair to say he’s been a huge disappointment since, returning just 18 FPL points, which is why I’m looking to move him on ahead of Gameweek 27.

To identify potential signings, I’ve plugged in my ‘Hitman’ custom table, which focuses on a selection of stats I like to look at when searching for goalscorers.

In this particular example, I’ve included the top ten, using data from the last four Gameweeks:

The idea behind using stats to begin my search is to filter players, and as a result focus on a smaller, more manageable group who I can then run the eye test over.

Having flagged up Everton and Calvert-Lewin on New Year’s Eve, they continue to impress.

Only Liverpool have bettered their points tally since Carlo Ancelotti was appointed, whilst Calvert-Lewin’s underlying numbers during that run are superb – he sits top for big chances, shots in the box, shots on target and xG amongst all players.

With no other Premier League team crossing as often as the Toffees in recent weeks, the 22-year-old’s ability to threaten in the air is being put to good use, and I like the fact he stays central, challenging for every ball.

I think he has the potential to continue doing well (the fixtures aren’t as bad as they seem on first glance), but part of me feels like l may have missed the boat with this one, although I’m certainly not ruling him out.

Above: Burnley’s fixtures in Gameweeks 27-31

Whilst I have reservations about Burnley going forward, and their ability to create chances from open play, Wood has had a good season so far, finding the net ten times.

He’s also getting plenty of big chances – only Jamie Vardy (£9.8m) has more.

Another positive is his ability to score from set plays, which is relevant with Newcastle up in Gameweek 28 – the Magpies have conceded more attempts from dead-ball situations than any other club this season.

Despite this, no team has recorded fewer shots on target than the Clarets this season.

I’m not ruling Wood out, and I like the fact he definitely has a fixture going ahead in Gameweek 31, but at this stage, I think others are ahead of him.

Above: Wolves’ fixtures in Gameweeks 27-31

I do love it when a good attacking player turns up on one of my tables who maybe hasn’t shown up on the scoresheet recently.

Back in the fold following injury, I do like Jota but it does feel like I’d be replacing Maupay with another player who hasn’t scored since December, with rotation hanging over him. There is also an argument to say if you want a Wolves forward, find the extra from somewhere and invest in Jiménez.

The good thing is that I can run the eye test over Jota on Friday before making a call. If he can get anywhere near to his level of performance in the corresponding fixture from last season, where he netted a hat-trick, he could yet become an option, but let’s see.

So, I’m keeping my options open ahead of Gameweek 27, but as it stands, a forward transfer is definitely on the cards with Calvert-Lewin, Wood and Jota all under consideration.

However, with seven games still to be played in Gameweek 26, maybe another option will emerge?

Though Gameweek 27 seems a long way off right now, here’s how I’m currently set up… 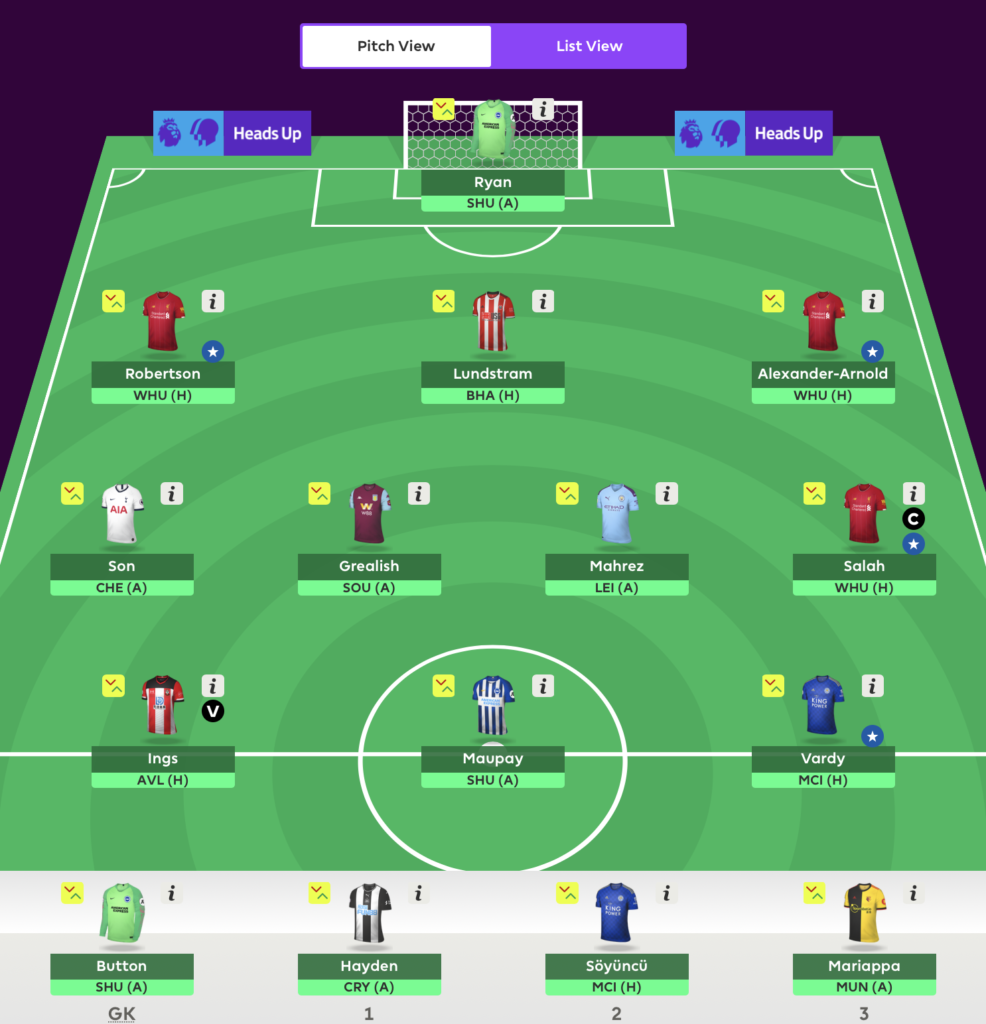