We interrupt your regularly scheduled programming to bring you this amazing artwork (look up) as drawn by the fantastic FPLDoodles who can be found at twitter.com/fpldoodles1, anyway now on with show…

Editor’s note – For those that might not be able to see the full image above, we’ll also include a nice full version of it below. Thank you Doodles and Greyhead for organising this! 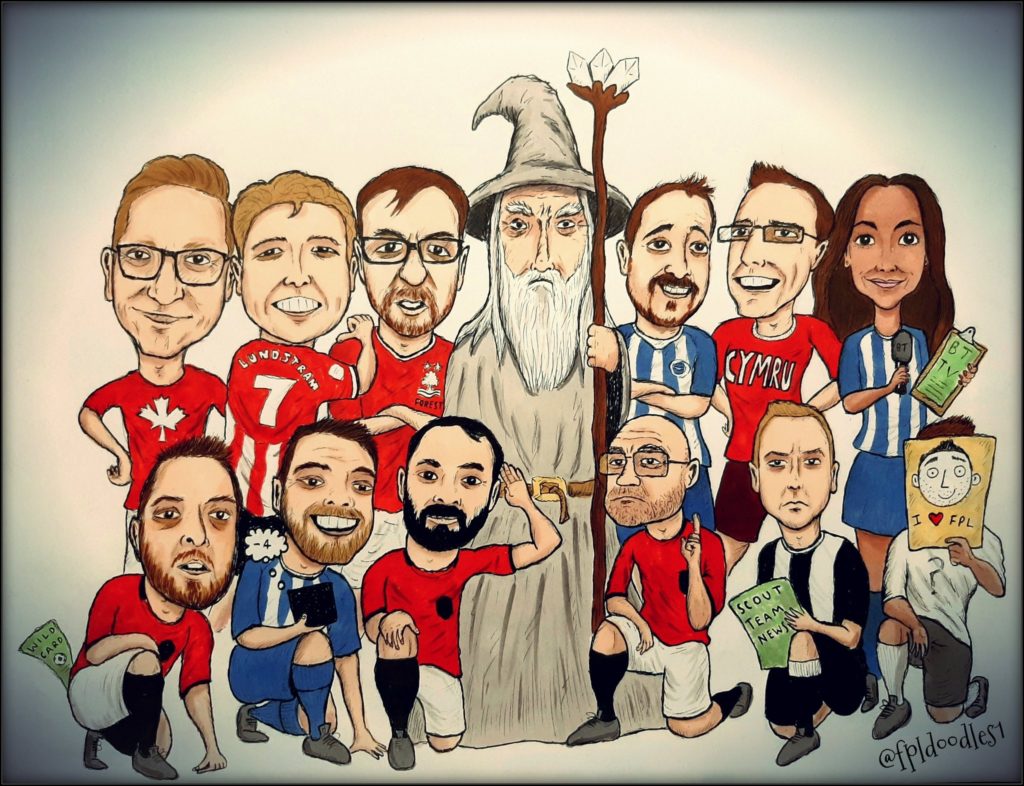 Storms raged over the Fantasy Premier League (FPL) world in Gameweek 26 as Ciara and Dennis caused fixture chaos in an already turbulent season for The Great and The Good.

The cancellation of the Man City vs West Ham gave us a whirlwind start and led to many a manager threatening to surrender to this downpour of misfortune, thankfully “the powers that be” managed to sandbag the game into the Gameweek and this was one decision not taken to VAR.

Then there was the John Lundstram miracle as not only did the good Lord’s game endure the elements with the rain clouds parting, but he also survived his initial benching as he popped up with a goal and made some FPL managers believers again.

As a reminder The Great and The Good are a handpicked group of FPL celebrities (?), FF Scouts or Pro Pundits who I will follow to see what we can learn as they navigate their way through the season. They are the Scouts (Mark, Joe, David, Geoff and Neale), FPL “celebrities” (Az, LTFPL Andy, FPL General and Jules Breach) and finally from the Hall of Fame we have Ville Ronka, Matthew Jones and Sean Tobin.

The phrase it’s a marathon not a sprint is apt for this Gameweek as it lasted for 11 long, long, long, did I mention how long days with each set of matches bringing another twister in the fortunes of our managers.

FPL General had a monster monsoon of a Gameweek with a score of 82 wind-propelled by Kevin De Bruyne, Dominic Calvert-Lewin and Son Heung-min’s goal-scoring gusts, giving him a rise of 100,000 places in the overall rankings (OR).

Special mention to Sean Tobin who has shown why he is the Hall of Fame no.1 over the last six weeks moving from 670,000 to inside the top 100,000, his decision to double up at the back with Liverpool proving crucial to this run.

All hail the king with Mo Salah the popular captain choice this week, but the wind was taken out of The Great and The Good’s sails as he failed to deliver, Jules Breach was the only one to go with Sergio Aguero but he proved to be all puff and no points.

Neale is holding his nerve and a firm grip on top spot, sitting with pinpoint accuracy at 10,000 but with Sean’s surge, Ville lurking and Az’s bouncebackability the race for the title of The Greatest of The Great and The Good looks to be going to the wire.

Amid the wind, rain and wild conditions two of The Great and The Good decided to cash in their Wildcard (WC) chip with Joe and Andy first to blink in this FPL game of tornado chasing.

This is definitely not a “mild card”, with eleven moves overall and changes to six of his seven defensive players (including goalkeepers). He is playing the fixtures with triple Saints, double Sheffield United, double Wolves and the obligatory full complement of Liverpool players, although whether he has the right order of Reds is a matter of debate.

One of his big decisions was the release of Jamie Vardy to fund Son and Roberto Firmino, although understandable based on the Leicester man’s form (10 points in last 5 games) this could come back to bite with the fixtures looking good from Gameweek 28.

His recruitment of Firmino looks a shrewd move despite his erratic form, he is in the top five for chances created (11) and shots inside the box (14) in the last four weeks, although it does mean he has given up the benefits of the now fully operational double Liverpool back line.

Rather cruelly his WC has been described as sideways by Az and there is no doubt the chip has not had an immediate impact, he will be cursing his luck with Calvert-Lewin scoring on his exit and the cruel Son injury, but this chip is for the season not just the winter break so let’s hold judgement until the final reckoning.

The full ins and outs below:-

Andy also threw caution to the wind and cashed in his WC with an equally dramatic impact on his squad with 11 transfers out, one of which was De Bruyne, preferring Riyaz Mahrez to the ginger, or strawberry blonde midfield wizard and we know how that ended up.

He has taken a similar path to Joe with Saints and Blades coming into his back line, he picked Adama Traore over Jack Grealish to give him triple Wolves but intriguingly there are also a couple of Burnley punts with Dwight McNeill and Charlie Taylor.

Burnley have a nice couple of games ahead and Taylor looks a good enabler, but the McNeill move is surprising as he has done little to capture the form from last year. Also noteworthy is a complete lack of Leicester players with Vardy sacrificed for Firmino, surely, they must improve on their under the weather performance at Molineux as their fixtures turn.

It does look like this WC was played with a Bench Boost in mind for next week as his squad has near perfect fixtures, let’s hope if he does push the button that we finally see Andy flooded with points in Gameweek 27.

The full ins and out are below:-

This is a summary of the transfers for this week:

Mark continues his hurricane of hits, five in the last seven weeks as he brought in Son and Mahrez, he has clearly decided that he needs to be proactive to make up ground, the Spurs midfielder provided a little Son-shine before the injury news earlier this week.

Many of the managers decided to breeze the day and blow the cobwebs off their cheap defensive options with Lundstram and Martin Kelly making way for either Jack Stephens or the variety of Sheffield United picks available but maybe Ville’s choice of Willy Boly will prove a master stroke.

David triple tornado-ed down on the Blades with Dean Henderson, Enda Stevens and of course Lundstram, to whom he remained loyal and with the second-best defence in the league who can blame him.

The template for The Great and The Good looks like this:

* brackets show number of teams they appear in

The two wildcards have shaken up the template with Boly and Stephens adding to a host of defensive options being considered alongside the must have Trent Alexander-Arnold who continues to provide a blizzard of points for his owners.

The wind has also been put up the front line with Raul Jimenez and Firmino now challenging for that third striker berth, whilst Son has breezed into town only to breeze back out again with his long-term injury.

Gale force explosive returns are key for many of The Great and The Good looking to gain valuable ground in the overall but which of have been the best in picking out the double-digit cyclones?

Mark, Geoff and Ville lead the way with forty-six double digit scores from their squads this season, Mr Ronka takes the edge as he has only benched two hauls, they will all need more of these if they are to continue their ascent of the FPL mountain.

Jules sits at the other end of this metric with only thirty-six double digit scores this campaign made worse by having benched six, so she may want to brush up on her squad selection if she is put an end to her run of ten consecutive red arrows.

The same can’t be said of Matthew who has not benched any hauls this season but has only had thirty-eight to his name, you can assess your own performance against The Great and The Good via FPL Statisco.

The explosive blasts have been mainly provided by Liverpool and City players with Salah and De Bruyne leading the way on seven followed by Vardy, Mane on six with other names of note Mahrez, Son on five plus Aguero, Richalison de Andrade joining our defensive detonators Alexander-Arnold and Lundstram on four.

Plenty of questions coming out of the inaugural winter break, who should we give that third Liverpool slot to, is the Spurs striker spot cursed and will we ever the recover from the tedium of that Gameweek?

However, there is another dark cloud on the horizon with the return of the European schedule meaning even more rotation, putting further strain our squad strength. With City’s Champions League ban and Liverpool already making space in their cabinet for the Premier League trophy the attention of the top two looks to be firmly on matters European.

The problem facing FPL managers looking to make a late charge up the rankings is that the top two have the majority of double digit haul kings, the other prominent names of Son and Vardy are either injured or out of form, so rotation frustration looks to be a necessary cross to bear as we enter the business end of the season.

The last few weeks will truly test FPL managers with a keen eye needed to quickly jump on form players, a good ear to interpret every word of the press conference circus and courage to take a risk when the top two’s second string players start to play a more prominent role, Phil Foden springs to mind.

Let’s see what The Great and The Good do as more Wildcards start to fall… over to you FPL General as sources tell me his chip has been activated.

For those effected by any of the topics raised in the above article they can find me on Twitter at https://twitter.com/Greyhead19

Finally, a MASSIVE thank you to fpldoodles1 for his artwork, a creative genius and a really nice guy.