One of the world’s best FPL managers, Tom Freeman, discusses West Ham, Burnley, Dele Alli and Chelsea as he looks ahead to Blank Gameweek 31.

With Gameweek 29 coming to a premature end due to coronavirus fears, focus has turned to preparing my squad for Blank Gameweek 31.

There are currently only four Premier League matches scheduled on that weekend, and with just five players from the teams involved in my squad, I’ll likely be activating my Free Hit chip in an attempt to break into the top 10k.

Aside from the obvious targets at Liverpool and Wolverhampton Wanderers, West Ham United interest me. I’ve been encouraged by a few of their performances recently, and now they’ve figured out their best formation and got to grips with David Moyes’ more direct, counter-attacking style, I think they’re worth a look.

Whilst I’ve been hyping both Michail Antonio (£6.9m) and Pablo Fornals (£6.0m) via my Spot the Differential column, right now, Jarrod Bowen (£6.5m) is my top target.

After a couple of substitute appearances, he was thrown into the starting XI against Southampton in Gameweek 28, and scored his first goal on his first start. He followed that up with a tidy performance at Arsenal, hitting the post and then later, forcing Bernd Leno (£5.0m) into a decent save. He also seems to have developed a good understanding with Jeremy Ngakia (£4.0m) at right-back, who could be a useful, cheap pickup himself.

Looking at West Ham as a unit at the Emirates, there was actually quite a lot to like – the line-up was positive, they asked questions and looked the more likely of the two teams to score (they managed 14 shots, six of which were on target); they just need to be a bit more clinical in front of goal.

Their opposition in Gameweek 31 also plays a part in my thinking as Tottenham Hotspur have kept only three clean sheets in 26 games since Jose Mourinho was appointed in November.

For those considering a move, I’ll leave my ‘Hitman’ custom table here. In this particular version, it focuses on midfielders using data from the last three Gameweeks, which coincides with Moyes reverting to a back four.

This table has been quite a handy tool for me this season, highlighting the likes of Ismaila Sarr (£6.3m), Harvey Barnes (£6.1m) and Diogo Jota (£6.4m) nice and early, which bodes well for Bowen, who features despite playing significantly fewer minutes than others on the list:

Another side showing form is Burnley, who have picked up 12 points over the last six games – only Liverpool have taken more.

Charlie Taylor (£4.3m) and Dwight McNeil (£6.0m) have been excellent down their left side, which often sees the latter position himself in the half space. Nineteen of their 32 crosses on Saturday arrived via the pair.

Nick Pope (£4.8m) in goal, plus defenders Ben Mee (£5.0m) and James Tarkowski (5.1m) all look decent options, whilst the return of Chris Wood (£6.1m) is well timed. He scored and earned nine points against Spurs, and has now found the net four times since the turn of the year.

Despite it looking like the wheels have come off at Spurs, Dele Alli (£8.3m) seems to be returning regardless and has been putting up good numbers. Now it looks like he might be on penalty duties too, so he might be worth a spot.

The only other player I’m really considering outside of those mentioned above, and of course Liverpool and Wolves assets, is Sarr, though the fact they come up against Burnley puts me off – nobody has picked up more clean sheets than the Clarets at home this season.

If I do use my Free Hit chip in Gameweek 31, it has immediate implications, as I can look to take advantage by moving for a Chelsea player this week – something those navigating the blank via transfers may not be able to do, because let’s face it, they’ll probably have other priorities.

The appeal lies in the Blues’ opponents this weekend, my club Aston Villa. We’ve conceded more goals than any other side, we’ve faced the most shots at goal and continually get undone by set pieces. Whilst Chelsea haven’t been the most consistent of sides under Frank Lampard, they do seem to have turned a bit of a corner recently, and with a top four spot and the FA Cup still to play for, should have plenty of motivation.

Billy Gilmour (£4.5m) looks quality, and has turned in two hugely impressive back-to-back performances. Against Everton, he completed more passes than any other player on the pitch, and whilst he didn’t claim an assist, his vision was key to both of Chelsea’s first half goals.

Mason Mount (£6.1m) was really good too, but it’s also worth noting some of the veterans’ importance, like Pedro (£6.8m), Willian (£6.9m) and Olivier Giroud (£6.5m). Giroud led the line superbly, holding the ball up and bringing others into play, and bagged a goal and set up multiple chances. I’m actually considering transferring him in for Danny Ings (£7.1m) this week.

Chelsea’s fixtures to follow the blank are appealing too, and they travel well: they’ve picked up the same amount of points on the road as they have done at Stamford Bridge this season, despite playing one less game, and scored more.

In terms of captaincy this week, I’ll be avoiding the Merseyside derby. It’s currently on Bruno Fernandes (£8.5m), who is up against one of the worst defences in the league right now. It’s fair to say he’s lifted the whole club since his arrival, and I see Manchester United comfortably beating Spurs.

So, here’s how I’m currently set up ahead of Gameweek 30, with Giroud likely to come in for Ings. 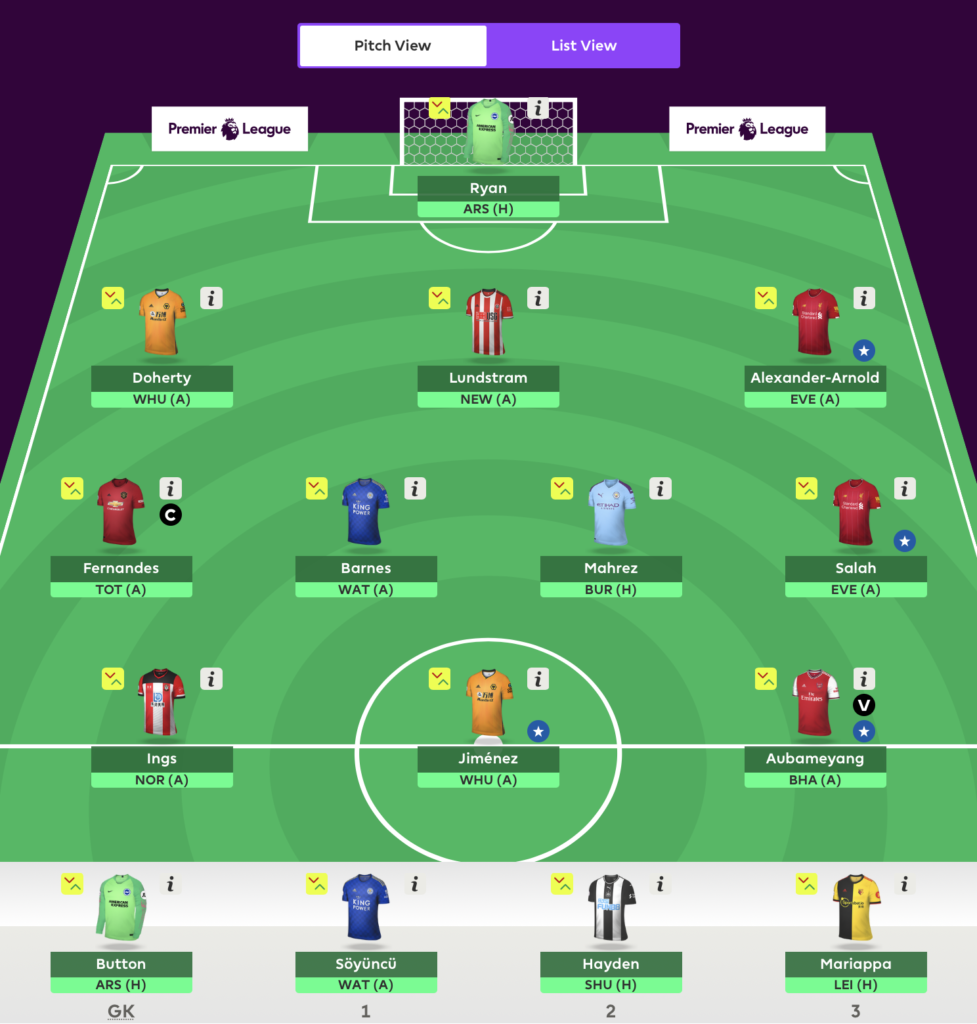