Welcome to the Fantasy Football Scout mini-leagues and community competitions end-of-season round-up, where we congratulate the 2020/21 winners as well as the new FPL Champion.

Pandin Bruyne held on, just, to claim victory in our Fantasy Football Scout mini-league on a tense final day.

Ray Freeman bridged the 11-point gap separating the pair ahead of the final round to finish level on points but it wasn’t quite enough – Pandin won on ‘transfer difference’, having made 38 trades to Ray’s 50.

Pandin finished the campaign with three successive red arrows, slipping from second in Gameweek 35 to 17th in the world. He had been in the overall top ten since Gameweek 26.

This was his eighth season, with two previous finishes just outside the top 50k.

There were a total of 49,409 teams who participated in the mini-league, and there was quality as well as quantity.

Fantasy Football Scout was the Best League in FPL.

The average score of the top five teams is used to rank the mini-leagues, so congratulations (and thanks) to Pandin Bruyne, Ray Freeman, Robert Tuck, Thomas Lumley and Hariharan Subramanian, all of whom finished in the overall top 30.

Robert Tuck (aka COVID-CASUAL) has won our Fantasy Football Scout Community Members mini-league by ten points from Nathan Jobling, finishing 25th overall. This was Robert’s 11th season, his best previous finish being 45,017th in 2007/08. As he remarks in his profile, he has been taking FPL far more seriously since COVID.

The table below, courtesy of Mini-League Mate, shows the top 20 leaderboard.

The top five in our Community Members mini-league are all awarded prizes:

And the prizes don’t stop there – the Manager of the Month award for May goes to Luke Pasfield, who wins a £50 Amazon voucher.

For the six winners to claim their prizes, please email geoff@fantasyfootballscout.co.uk.

The previous monthly winners were:

He entered the top ten in Gameweek 21, hitting the number one spot in Gameweeks 29 and 30. From then on, he remained in the top three till he returned to number one in Gameweek 38, when he captained Sadio Mané for a score of 88.

Michael has been playing for 13 seasons but had never previously finished higher than 75k. He joined us for a question and answer session ahead of Gameweek 30, when he revealed that he did not actually own any teddy bears but promised to buy one if he won!

Elsewhere, there was disappointment for Ola Hovde, who had led for all but five rounds from Gameweek 10 to Gameweek 37. On the last day he scored only 53(-4) and dropped to tenth.

The top three managers – Michael, Mohamad Abdallah and Viktor Johansson – all beat the previous highest winning total of 2,668, set by Jon Reeson (aka Westfield Irons) in 2009/10.

Jon won at a canter that year, topping the table for the last 11 Gameweeks. But, perhaps more impressively, he achieved his lofty points tally at a time when only one chip was available – a single Wildcard.

Nonetheless, there were twelve Double Gameweeks that season and Jon clearly made the most of them – this season had ‘only’ six doubles and a triple.

Norwegian manager Aleksander led by three points entering the final round but all outcomes remained on the table – including a tie for first place. Aleksander was 13 points adrift in the overall standings and the leading pair had made the same number of transfers.

But the win, draw or high-scoring defeat Aleksander needed failed to materialize, as he lost 56-73 to Peter Murphy. Ville completed the turnaround with a 66-52 win over David Meechan.

So Ville, who finished fifth in League 2 Division 1 last season, claimed the title thanks to his superior rank (42,650th compared to Aleksander’s 68,621st). The two elite managers are 172nd and 92nd respectively in our Live Hall of Fame.

Below is a screenshot of the final standings in League 1. An interactive version of the table can be found on the main Head-to-Head page.

In the tenth versus eleventh relegation six pointer, Richard Clarke beat David Arblaster 71-55 to ensure his survival in the showcase division.

Both managers brought in Sadio Mané, although David did so for a hit, and both captained Mohamed Salah. The tie ultimately became a five-a-side match as the two managers shared six players.

But ten points from Vladimir Coufal together with assists from Raphinha and Son Heung-min helped Richard to a relatively comfortable win.

And down in League 8 Division 39, a final day victory helped Rafsan Swapnil end the campaign as the highest-scoring manager in our Head-to-Head leagues.

He accumulated an impressive 96 points out of a possible 114 and easily won his division by 21 points. Rafsan finished 59k overall, his first top 200k finish in his eighth season.

The qualifying round for the Open tournament took place in Gameweek 25, with the Members-only competition starting seven days later.

Out of the 1,536 who qualified for the knockout rounds, the two managers adding silverware to their trophy cabinets were:

The winners each received a £150 Amazon voucher with the two runners-up, EUG in the Members Cup and Mince n Tatties in the Open Cup, picking up £100 Amazon vouchers.

Neale covered the action in each of the finals here.

The eighth edition of TorresMagic’s Last Man Standing competition saw 4,557 people take part. Joining the seven previous winners was The Hsuper One, who secured himself a free Premium Membership for the 2021/22 season.

The incredible consistency required to win the LMS helped The Hsuper One to a career best rank of 17,452.

Vegard Knutsen is the winner of my Top 10k Any Season mini-league, open to all those with a top 10,000 finish in their career history.

Ray, who was second in the FFScout Open-to-all mini-league, finished 19th overall.

Ray also won Chaballer’s Hall of Fame >Top 1k< mini-league, a comfortable 54 points ahead of Paul Strange. Ray is 113th in our Live Hall of Fame and Paul 74th.

A special mention to Tom Stephenson (aka Badgers9) who once again achieved a top five finish after claiming the runners-up spot in last year’s mini-league.

Congratulations to John Forshaw who claimed first place in my Multiple Top 10k Finishes mini-league by 22 points. Jack Penn (aka ZoumasBloomers) picked up the silver medal.

After twice finishing inside the top 10,000 before, John achieved a career-best 396th overall following a last round Bench Boost score of 81 points.

John’s FPL journey offers hope to all those who struggled this season. His best-ever rank followed his worst-ever rank, as he bounced back from 1,243,545th in 2019/20.

Killingholme Clay triumphed in the elite Top 100 Any Season mini-league.

Even more exclusive than the ‘top 100 mini-league’ is the ‘top one any season’ mini-league, aka Simon March’s FPL Champions League

Andy was the highest ranked of our Pro Pundits, nine points ahead of Fábio Borges and 12 in front of FFS founder Mark Sutherns.

In Gameweek 38, Holly Shand was the highest-scoring Pro Pundit for the second week in a row. Her 88 points was thanks to double-figure hauls from Mané, Ederson, Coufal and Kane.

She ended the season with four successive green arrows which pushed her up to 35,354th overall.

THE NEXT GREAT AND THE GOOD

Les has also won my Opening Day League which, as the name suggests, was for managers who joined within the first 24 hours of the FPL launch on 15 August last year.

In Skooldaze’s FPL Vets 2006 or before mini-league, Anoop K (aka RobinHuth) celebrated victory over Andy Short by 22 points.

JANUARY TO MAY LEAGUE 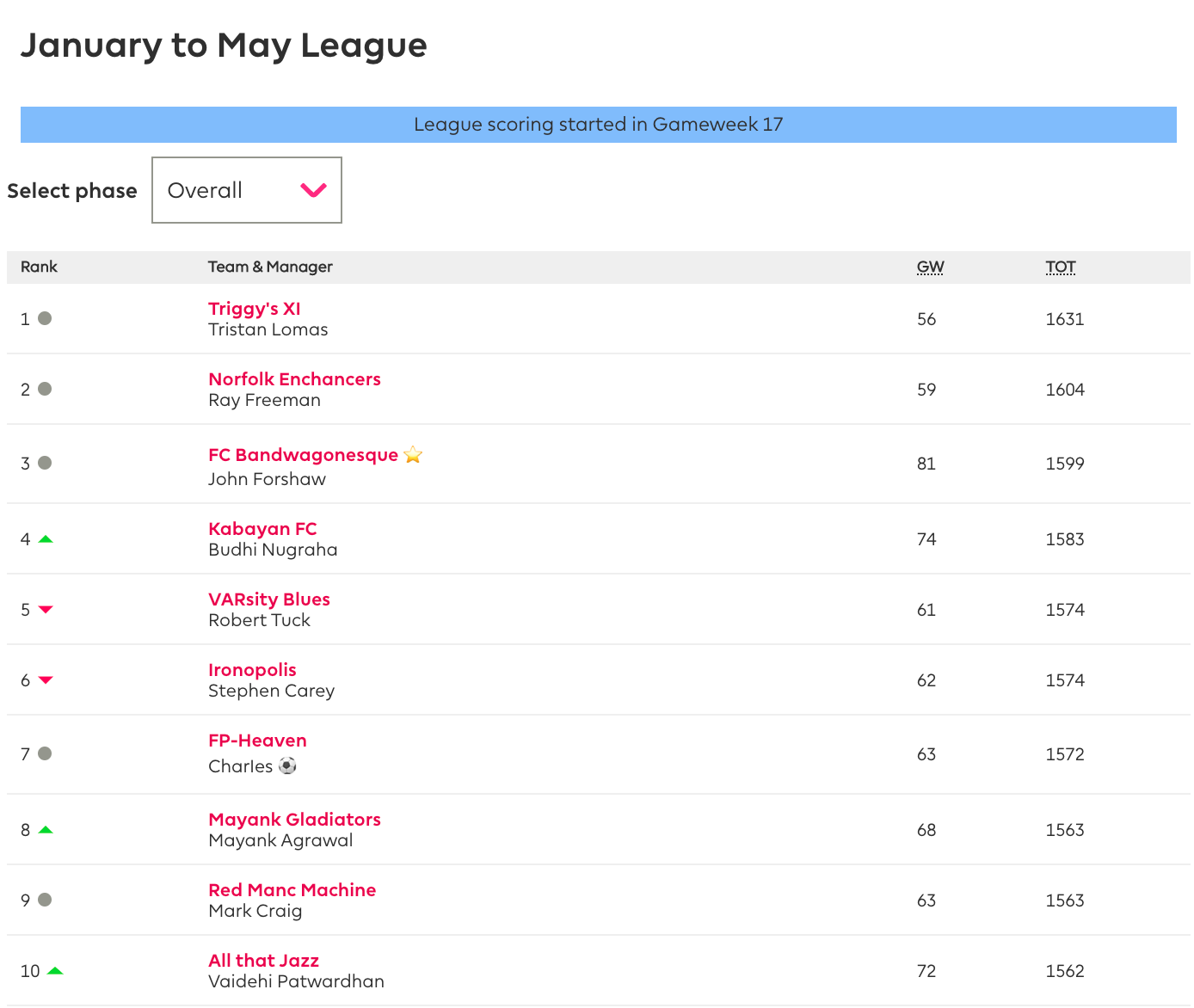 Tristan Lomas (aka Triggy) took first place in my January to May League by 27 points from Ray Freeman.

Tristan rose from 441k overall at the beginning of Gameweek 17, when the league started scoring, to his final rank of 580th. 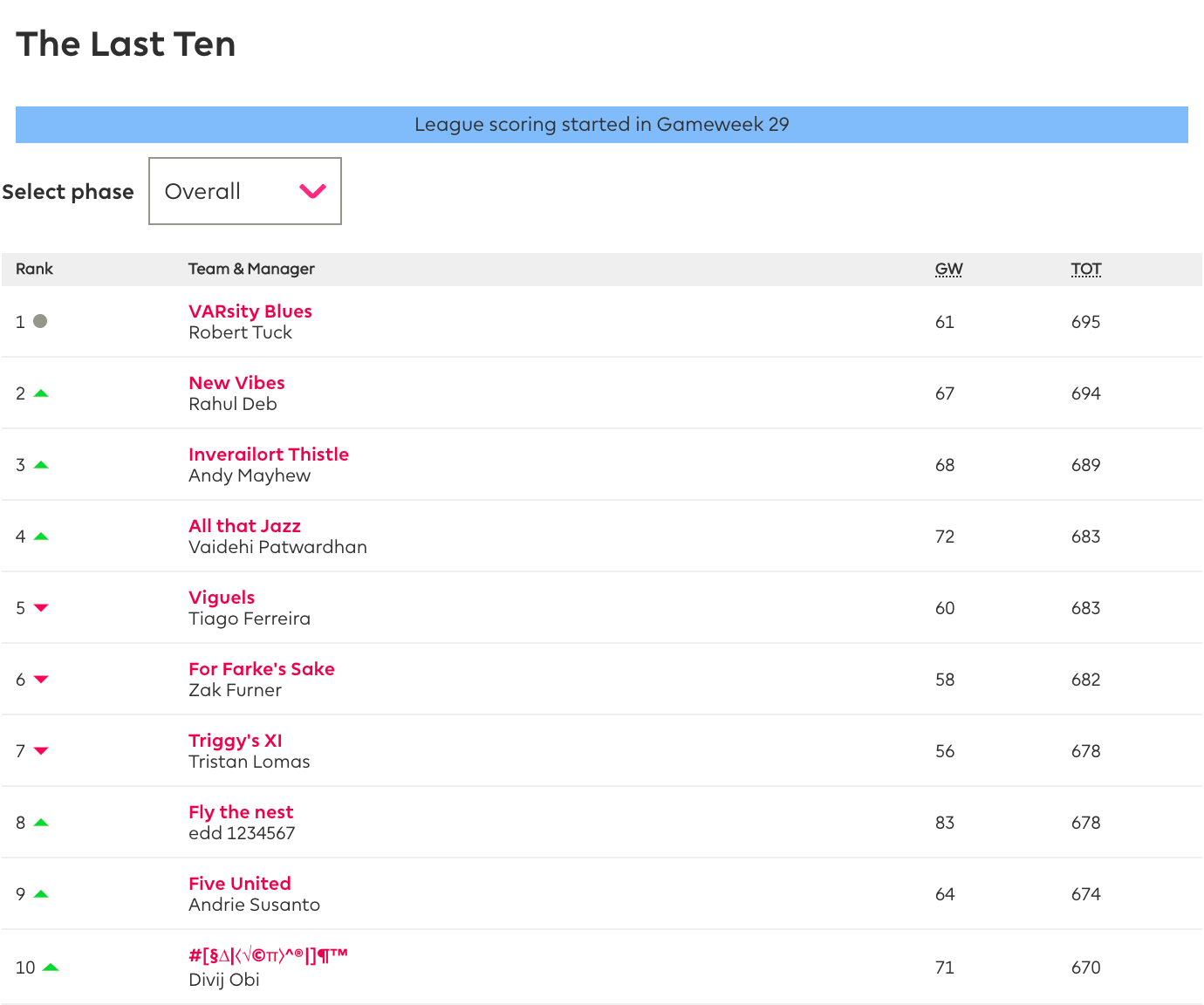 And, rounding off the roll call of mini-league winners for 2020/21, Robert Tuck completed a memorable season by adding The Last Ten to his list of accolades.

His 695 points in ten Gameweeks was just one point more than Rahul Deb.

Robert used three of his chips after the league started scoring in Gameweek 29, playing his Second Wildcard in Gameweek 31, Triple Captaining Harry Kane in Double Gameweek 32 and deploying his Free Hit in Blank Gameweek 36.

Any questions relating to community competitions please email geoff@fantasyfootballscout.co.uk or comment below this article.

Many thanks to TopMarx for his contributions and enjoy the Summer break!