Six-time top 5k finisher Utkarsh Dalmia – aka Zophar –  talks us through the recovery time for Premier League players over Christmas in his latest Pro Pundits piece.

The busy Christmas period is almost upon and, for us Fantasy Premier League managers, it’s a fortnight we look upon with great excitement but also some fear of the dreaded ‘R’ word: rotation.

Of course, the schedule is not the same for every team and certain clubs have fixtures better spaced out than others between Gameweeks. As managers, the best we can do is take note of these differences and try to prepare our squads accordingly, predict benchings and see what teams we should target.

Managers often complain about having less than 72 hours to recover between matches and this is backed up by medical data. Recent research has shown that muscle injury risk increases by almost 20% when recovery time is reduced from six to three days.

It concluded that fixture congestion and insufficient recovery time between matches are two of the major risk factors associated with injuries and suggested that players should have at least 96 hours between matches in order to recover fully. Beyond the 96-hour period, there were no significant gains observed.

Keeping this in mind, I have listed the festive schedule for all Premier League teams below, with the respective gaps in hours between fixtures. 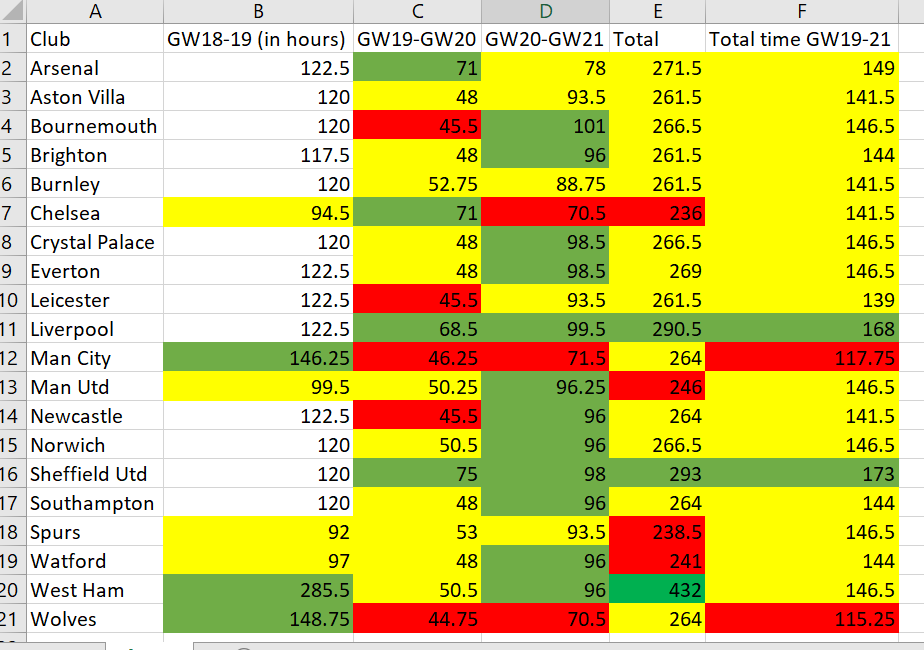 Gameweek 19 recovery (column B) does not appear to be a major issue, with most teams having well over 96 hours to rally themselves from their last league game. The clubs with the shortest rest periods are marked in yellow.

Liverpool’s fixture gap is calculated assuming they make the Club World Cup final. Manchester City and Wolves have the longest gap after West Ham, who have a mini-winter break due to their Gameweek 18 fixture postponement.

As you can see in column C, Gameweek 20 is where it gets a lot trickier. No team is afforded the ideal 96-hour recovery period, with Arsenal, Chelsea, Liverpool and Sheffield United (all in green) enjoying the longest rest periods.

Watford, Manchester United and Tottenham Hotspur stand out as the only three teams to be shaded yellow in both columns B and C, which is a potential flag for rotation. However, it is worth nothing that both the matches are at home for Spurs, so there is less time spent on travel etc.

All the teams in yellow are potential rotation concerns but the ones in red have it particularly difficult.

Bournemouth, Leicester, Manchester City, Newcastle and Wolves have less than 48 hours between their Gameweek 19 and Gameweek 20 matches, with Wolves being the lowest at 44.75.

Another factor we have to consider apart from rotation is fatigue, and with such a short recovery period there is naturally going to be a dip in performances for teams who cannot afford to rotate.

This looks like a perilous week for Manchester City assets in particular as I don’t see Pep Guardiola risking the likes of Kevin De Bruyne (£10.3m) in both games.

In comparison, Gameweek 21 (column D) is more forgiving with 12 teams enjoying a minimum of 96 hours of recovery time.

The teams in yellow all have at least 88 hours (except Arsenal with 78), so they should be fine too.

However, the teams in red (Chelsea, Man City and Wolves) have less than 72 hours recovery and again this is something that we need to take note of. Rotation can again be expected at Chelsea and Manchester City given the depths of their squads, while Wolves might be forced to ring the changes as well.

Column E reflects the total number of hours between games over the festive period and it can be seen that Chelsea (236), Spurs (238.5), Watford (241) and Man Utd (246) have the most congested schedules.

All other teams have at least 261 hours, with Liverpool (290.5) and Sheffield Utd (293) having the most relaxed schedule. West Ham’s total is inflated by their blank week in Gameweek 18.

Gamweek 20 and 21 look tricky in particular, so the final column F disregards the gap between Gameweeks 18-19 (column B) and focuses more on those two weeks.

The teams in red, Manchester City and Wolves, have it significantly harder than the rest, with both sides afforded less than 120 hours recovery for two matches combined. The fact that they had longer rest periods in Gameweek 19 does not really help from a recovery standpoint.

Liverpool and Sheffield United’s recovery period again stands out with 168 and 173 hours respectively. 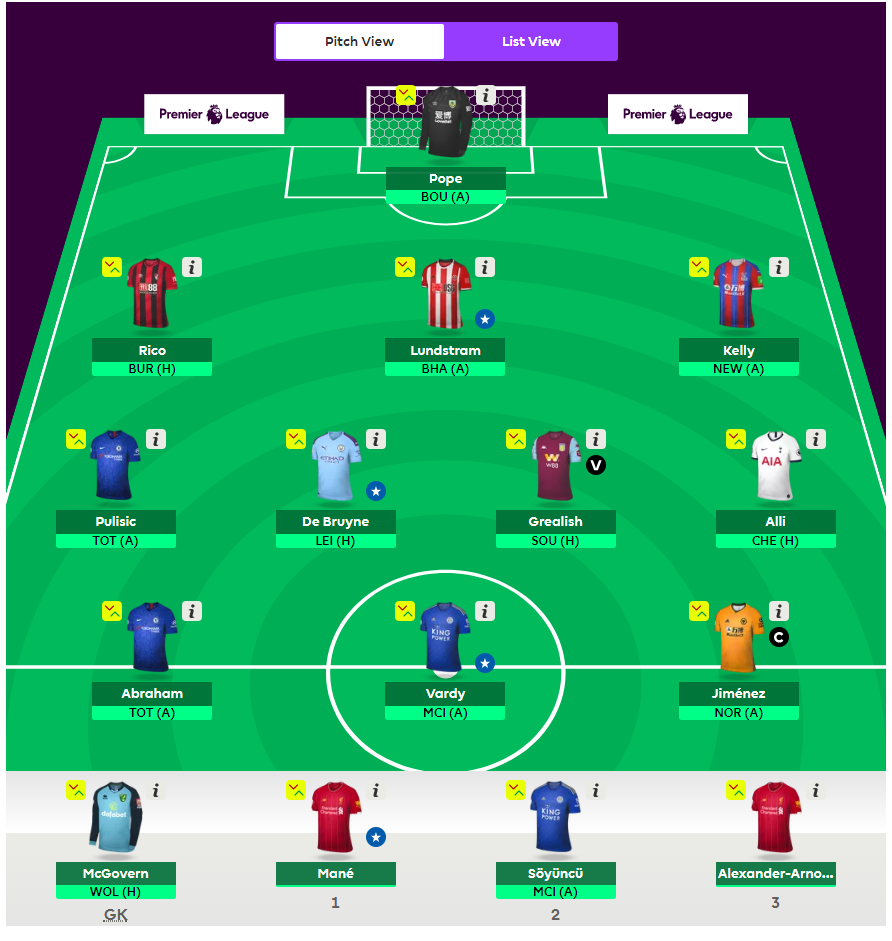 With regards to my team, I have two free transfers and £0.4m in the bank.

Watching the last few games as a Chelsea fan has been soul-crushing and I definitely want to reduce my emotional investment in the Blues. Christian Pulisic (£7.4m) will be making way for Son Heung-min (£10.1m), and, as I need to raise £2.2m to fund it, I’ll either be downgrading Trent Alexander-Arnold (£7.3m) or Tammy Abraham (£8.0m). I could swap Raul Jimenez (£7.5m) to Abraham the following week but I’m not sure I will given how badly Chelsea have slumped.

Captaincy is up in the air, with Jimenez, De Bruyne, Jack Grealish (£6.1m) and Son all decent options.