In our latest Pro Pundits article, Lateriser12 – who has overall ranks of 77th and 189th to his name – gives Fantasy Premier League managers some tips for the Christmas period.

It is the holiday season and the Gameweeks are coming thick and fast. For us Fantasy Premier League fans, this is a gift in itself. During these times, we don’t have too much time to dwell on our decisions and we need to be quick and precise. With this article, I hope to concisely present some important information which might hopefully help you with a few of your dilemmas this Gameweek. We can call it a ‘cheat sheet’, of sorts.

Last time I wrote, I spoke at length about playing the switch-hit against Jamie Vardy (£10.1m). I did it in Gameweek 17 with a Mohamed Salah (£12.2m)-sized captaincy and it led to me halving my rank and jumping from 124k to 66k. This despite not owning Kevin De Bruyne (£10.4m) in Gameweek 17 (else I would have been well inside the top 40k).

I also spoke about Marcus Rashford (£9.1m) at length and I went with my instinct and got him in Gameweek 18 and immediately gave him the captain’s armband. That did not go as well as planned (a small red arrow and I’m currently sitting at 85k) and admittedly I might have a certain bias when it comes to Manchester United assets. That said, when a certain Paul Pogba (£8.4m) came on with 26 minutes to play, we saw a different United playing. Armed with a silky smooth through-ball, he was carving open the Watford defence at will and from memory created three decent chances as soon as he came on. I wonder if the deep block struggle remains if Solskjaer starts using Pogba at number ten.

As a Son Heung-min (£10.0m) owner and a De Bruyne non-ower, the red card wasn’t that big of a problem for me. It led to probably the easiest decision I’ve made this season. In fact, I made the switch three minutes after the red card so as to not overthink this obvious move.

Yes, I can think of hacks and other ‘maverick’ moves to make ground but when it’s this obvious, one must do it. Some might say that De Bruyne is the best value FPL player this season. I say, on current form, De Bruyne is simply the most dangerous FPL asset in the game right now. How he has got away with just 23 points in the last two Gameweeks, I’ll never know.

This leads to one more week in my team for Anthony Martial (£7.7m), Rashford and Christian Pulisic (£7.3m). Hopefully, Mr. Pogba is in a merry mood and puts on a Santa coat gifting big chances to my United assets this Gameweek.

Enough self-indulgence. Now, I’m going to present you with a few pieces of information that might or might not help you with your FPL decisions this week.

First, let us look at fatigue and try determining which of the matches this week might be influenced by them.

If you haven’t already ready Zophar’s excellent piece on the same subject, I highly recommend reading it here. I’m borrowing his chart to determine the ‘fatigue’ factor we talk about here. 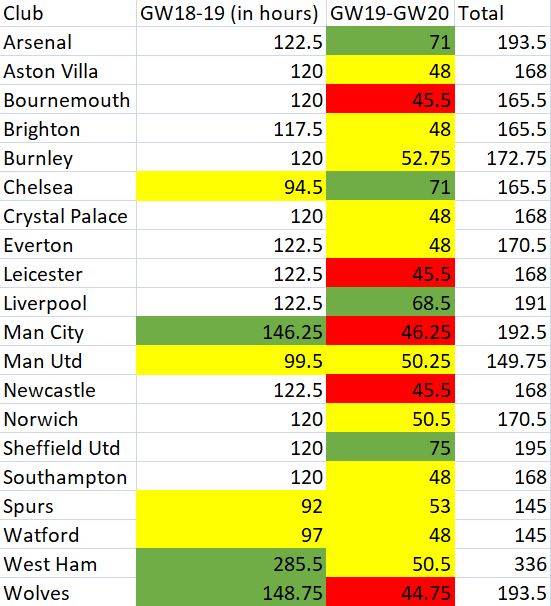 Now I’ll present some important statistical information that might influence your captaincy decision this weekend. We’ll most likely see a split captaincy in Gameweek 19, with there being a number of viable candidates. Here are some noteworthy stats:

Here’s how my squad currently looks for Gameweek 19:

Before I sign off, I would like to wish you and your families a Merry Christmas and a happy and healthy New Year. May your holiday season be full of green arrows! I hope this attempt to create a cheat sheet has helped you guys. Until next time.

Fantasy Football Scout user Lateriser12 has a very impressive Fantasy CV. He has registered two finishes in the top 200 (one of them equating to number one in India) and four in the top 10,000 in the last six seasons. The secret to his success has been playing non-conventionally and fearlessly, swearing by ‘upside chasing’ and not giving ownership much of a look.