Jay Egersdorff famously once said “FPL is a game of probability”. But what if you could use the wealth of data we have accumulated so far this season to swing the odds in your favour and storm to success in the final third of the season?

If there is one stat to rule them all, it could well be FPL Goal Involvement. If a team is going to score, who is the most likely player to be involved in the goal or the assist? A key component of ‘Talisman Theory’, this stat matures like a fine wine. The more gameweeks you give it, the more reliable it becomes as an indicator of future performance. But what if you could take the data and the stat one step further to predict what will happen between now and the end of the season? Amongst the realms and realms of stats, could we have found a hidden algorithm that reveals the secret formula to FPL success?

Which teams will score the most points between now and the end of the season? 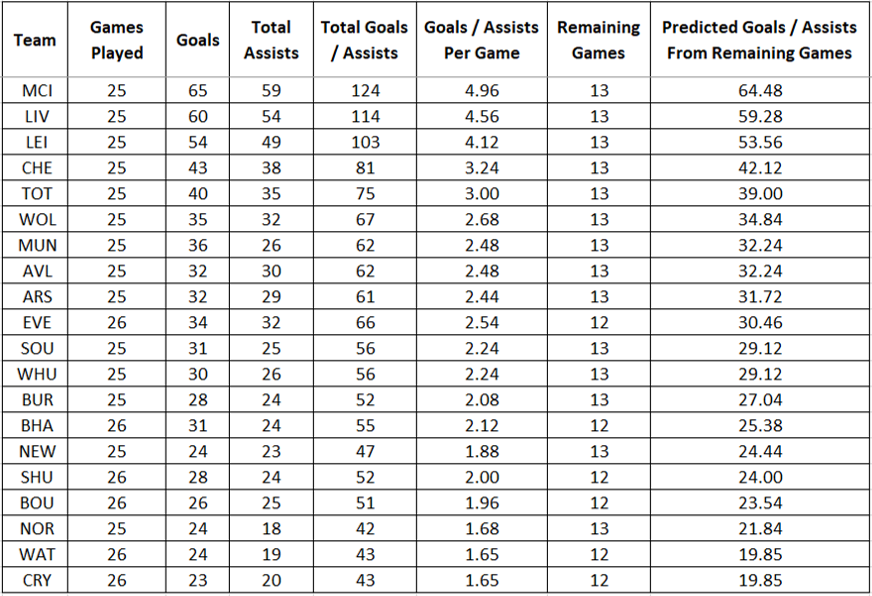 In the above table, we have looked at how many goals and assists each team has scored to date. Dividing this total by the number of games played, we get an average figure for how many goals and assists they get per game. Man City come top with 4.96 attacking returns per game while Crystal Palace and Watford are joint bottom with a meagre 1.65 a game. This highlights one of the big flaws of Talisman Theory. It’s all well and good Wilfred Zaha being Crystal Palace’s talisman, but if his team’s total attacking output is puny and listless, then his FPL points are likely to be few and far between.

Taking how many goals and assists a team has gotten on average per game and multiplying it by the number of games they have left this season, we can project how attacking returns they are likely to get in the next 12 gameweeks or so. And if we can layer on a player’s FPL goal involvement on top of this, then that’s when things get really interesting.

Which players will score the most points between now and the end of the season? 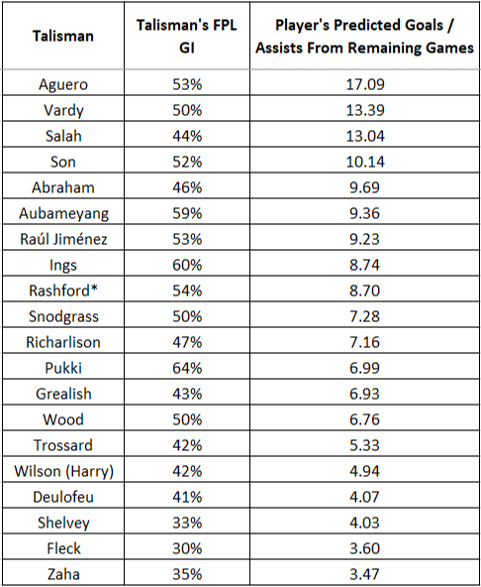 *Rashford faces a period on the sidelines and may therefore struggle to hit the predicted levels.

Now if Aguero has a 53% FPL goal involvement, we can expect him to get 53% of his team’s 64.48 goals and assists. Obviously he can’t score AND assist a goal by himself, so if we divide this figure by two to assume he either scores the goal or gets the assist, then we can project 17.09 attacking returns from him between now and the season’s end.

Obviously none of us have a crystal ball and no projection is 100% fail safe. Caveats like injuries and players being rotated and not starting every game will have to be taken into account. But it will be interesting to return to this article on May 17th and see how close these predictions actually were!