When you get into the knockout stages of these types of tournaments you have to focus on the long term.

The Netherlands and France have the best chance of progressing on their respective sides of the draw and both have players we can target. Italy have also shown they will be no pushovers in this competition and start with a favourable fixture against Austria, while Sweden and Denmark are perfect teams to find those enablers. 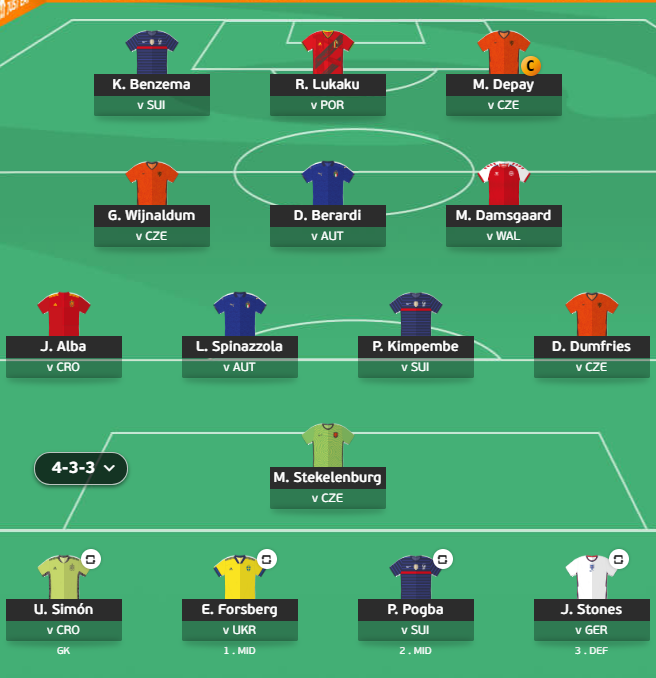 Spain looked impressive defensively in the group stages and their sheer level of possession means I don’t expect Croatia to enjoy their game against them.

Stekelenburg finds himself as the cheapest route into a good team that should face little complications to get to the semi-final.

England have kept three clean sheets so far in this competition and are happy to be the team that frustrates the opposition. It isn’t hard to imagine that they will do the same with Germany.

Alba, who has had more final-third touches than any other defender so far, completes my Spanish defensive double-up.

Spinazzola has been instrumental to Italy’s good form and plays as a left-winger for the most part, so he’s an easy inclusion.

Kimpembe starts my triple-up of France players who I believe should reach the final and offers the security of starts, with uncertainty raging at full-back.

The Dutch wing-back Dumfries has been electric so far this tournament and has every chance of returning at the other end of the pitch.

Sweden have been a joy to watch in this tournament and Forsberg is the player that epitomises that joy. With three goals to his name already, there is no reason to believe he can’t continue his form against Ukraine.

Pogba is integral to everything France do and you only need to watch his two world-class passes in the Portugal game to see what he can bring to your team.

Wijnaldum plays in an incredibly attacking role for this Netherlands side and has already enjoyed multiple Fantasy returns this summer.

I don’t see a great deal of difference between Lorenzo Insigne and Berardi apart from the fact that the latter is considerably cheaper, so he is a perfect little enabler in a premium-heavy team.

Denmark are the feel-good story of EURO 2020 so far and Damsgaard is taking the talisman role. His goal against Russia was sublime and we could see more of the same against Wales, whilst I’m also backing the Danes to progress to the next round.

Benzema has shown why Didier Deschamps still has faith in him to lead the line for France this summer. Kylian Mbappe and Antoine Griezmann have flattered to deceive so far but Benzema scored a brace against Portugal to remind us all why he can still lead our Fantasy forward lines, too.

Lukaku has scored the majority of chances that have come his way so far. With Kevin De Bruyne also now fully fit, there is no reason to believe that his form in front of goal should stop. Even if they lose to Portugal, the targetman should see some joy against a suspect defence.

Depay has been an ever-present in most Fantasy squads. His Netherlands team have been the entertainers so far and they have a kind route to the final. With Czech Republic up first and then Wales/Denmark next in line to face them, you can imagine the Lyon striker will enjoy himself this weekend and beyond.