One of the world’s best FPL managers, Tom Freeman, takes a closer look at advanced central roles for Kevin De Bruyne and Mohamed Salah in his latest Pro Pundits piece.

There are many ways to play Fantasy Premier League.

Some managers will be more aggressive in their approach, whilst others play a more patient game.

On Saturday, as Liverpool’s line-up leaked on social media ten minutes before the Gameweek 17 deadline, I saw an opportunity to make a gain.

The midfield was likely to be a two-man unit, with Jordan Henderson (£5.4m) starting alongside Georginio Wijnaldum (£5.4m), in an expected 4-2-3-1.

Mohamed Salah’s (£12.2m) best goalscoring form has come when leading the line in a 4-2-3-1, with Roberto Firmino (£9.3m) positioned in the pocket just behind, and this trend continued against Watford, with the Egyptian not only scoring twice but also causing the Hornets defence problems all afternoon.

No player attempted more shots in the box than Salah’s seven this week.

The 2-0 win over Watford means Liverpool have scored two or more goals in 24 of their last 26 league outings. The 1-1 draw at Old Trafford and the 1-0 win at Sheffield United are the only games in which they failed to do that.

A Salah and Sadio Mané (12.2) attacking double-up, from Gameweek 19, is something I’m thinking about.

Unshackled, De Bruyne was on another level, and the most advanced Manchester City player:

De Bruyne’s 19-point haul, combined with Salah’s brace and a Sheffield United defensive double-up, contributed towards my Gameweek 17 score of 80 points, which has seen my overall rank rise to 50,107. 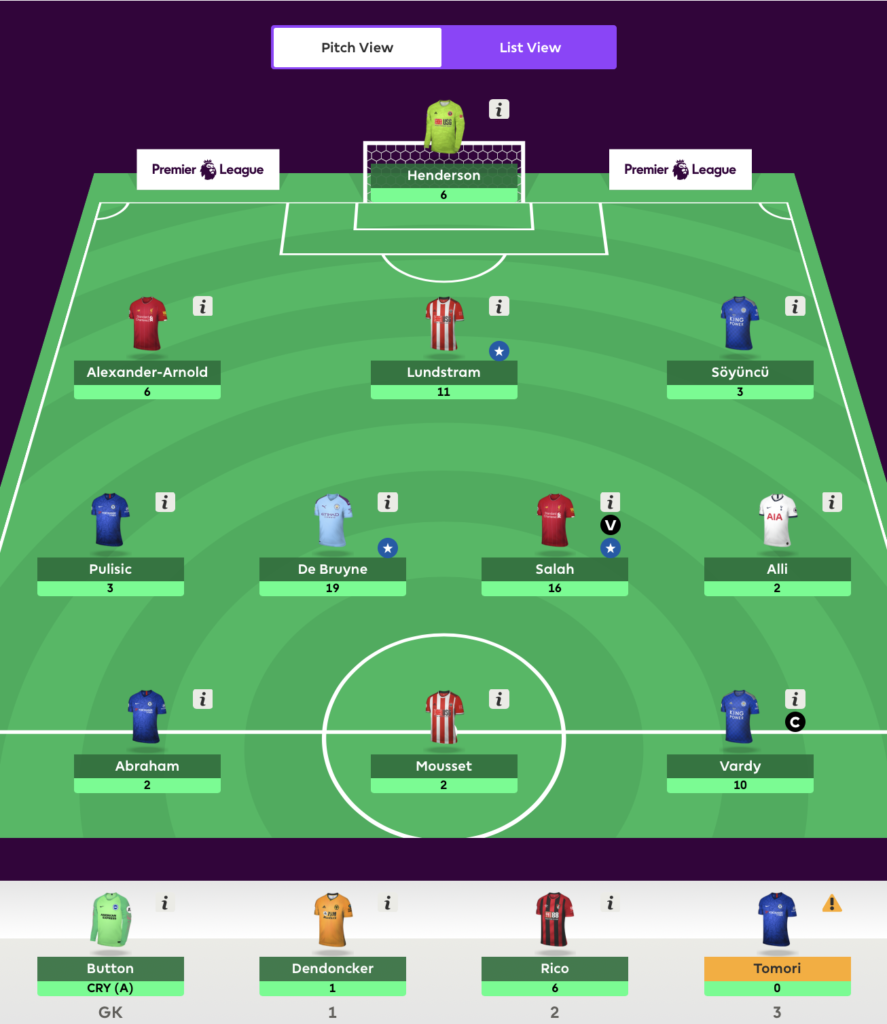 As I plan to activate my Wildcard soon, my next moves are essentially one or two-week punts, with Jack Grealish (£6.2m) and Adama Traoré (£5.2m) both under consideration.

Whilst there is a bit of worry amongst Aston Villa fans right now after several below-par team performances, Grealish still interests me, and I do think if Villa are going to score, he will be involved.

A slightly cheaper option is Traoré, who’s been playing on the right of Wolverhampton Wanderers’ front three in recent weeks. He’s a player who looks almost impossible to stop when he gets going and is also a bit of a differential, owned by only 5.4% of squads.

Despite this, it’s worth noting that while an away trip to Norwich City sounds like a fixture to target, only Tottenham Hotspur and Manchester City have given up fewer big chances than the Canaries over the last five Gameweeks. That suggests it’ll be a tighter game than many think.

Going forward, I’m also keeping Michael Antonio (£6.9m) in mind. Against Southampton, Antonio and Sébastien Haller (£7.0m) made their debut as a strike duo, in a 4-4-2, and thrived. The 1-0 scoreline could have been even better for West Ham United, had Antonio’s goal in the second half stood. It was the second time he’s seen a goal disallowed for handball in three weeks, having also had one ruled out at Chelsea.

Now, the Hammers have a nice break to refine the system before their next match at Crystal Palace in Gameweek 19.

So, here is how I’m currently set up ahead of Gameweek 18, with one free transfer and £1.3m in the bank. 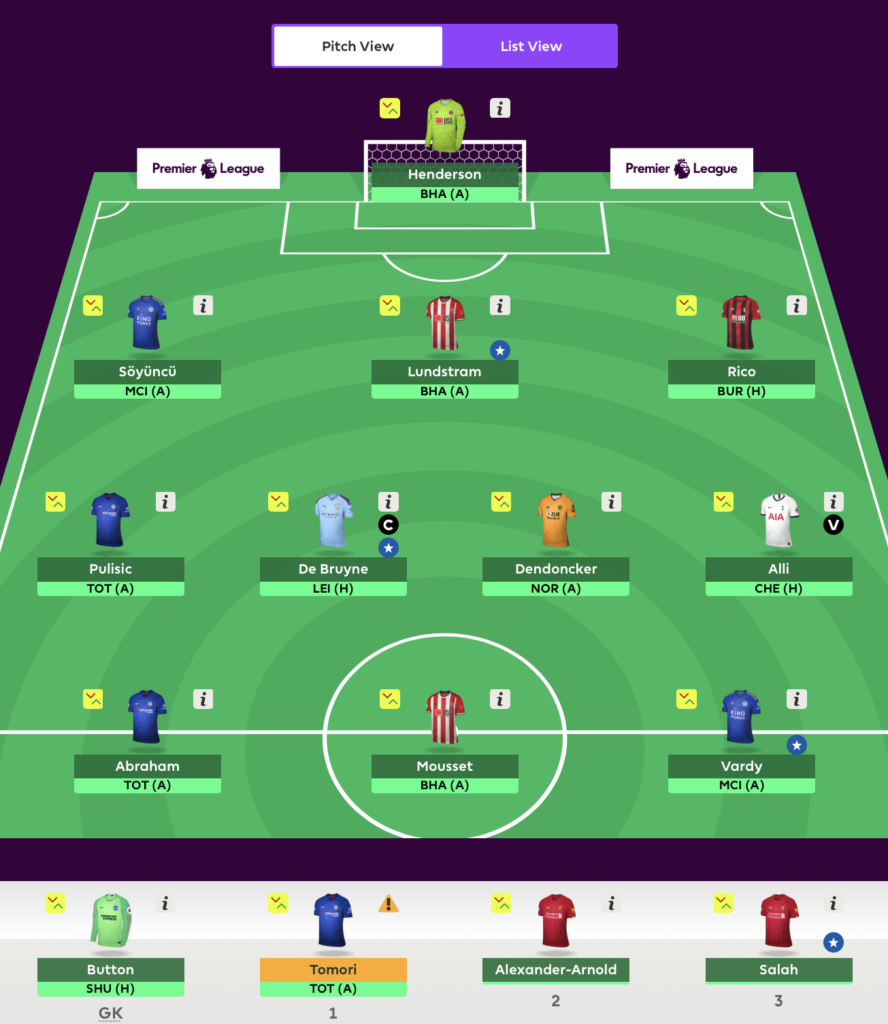 Grealish, Traoré, Richarlison (£7.9m) and Raheem Sterling (£11.8m) are all on the Watchlist, with one or two likely to come in ahead of Saturday’s deadline.

Re captaincy, I’m currently on De Bruyne, but Grealish is another candidate having returned 25 points over his last three games at Villa Park.

I currently have the vice captaincy on Dele Alli (£8.7m) but that will likely be removed.

Alli does have more goals against Chelsea than any other club but I do have concerns about Spurs and their ability to control games with their current midfield options. I’m just not sure they’ll get the balance right when selecting two of Eric Dier (£4.9m), Moussa Sissoko (£4.9m), Harry Winks (£5.2m) or Tanguy Ndombele (£5.8m), but captaincy decisions will likely go right to the wire.