Bruno Fernandes (£8.2m) has only pulled on a Manchester United shirt four times, but has hit the ground running.

After an encouraging debut, he has got better with each game.

On Sunday, he scored his first United goal and assisted another in a 3-0 win against Watford. It was an all-round midfield masterclass.

I expect him to play various positions over the forthcoming months: he can be a box-to-box midfielder, a no 10 and sometimes deeper in a two. Add free-kicks, corners and penalties into the mix, and we’ve got ourselves one hell of a differential for the season run-in.

Next up for United is Everton and Jordan Pickford (£5.3m), who has conceded eight goals from the last 11 shots on target he’s faced.

Fernandes’s 14-point haul, combined with returns for the likes of Trent Alexander-Arnold (£7.7m) and Riyad Mahrez (£8.5m), contributed to my Gameweek 27 score of 63 points, which has seen my overall rank rise to 27,495. 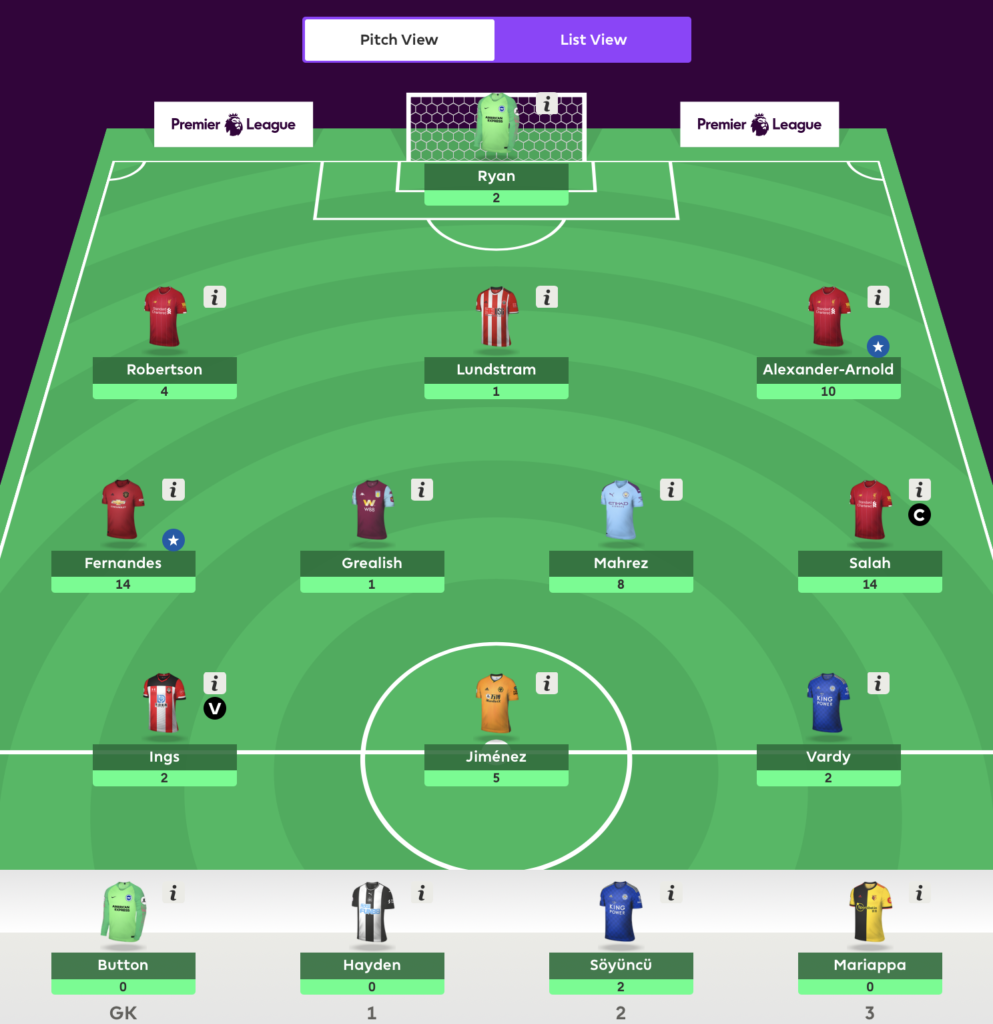 However, the arm injury sustained by Son Heung-min (£9.9m), and resulting move to Fernandes, increased my forward budget, and enabled a move for Raúl Jiménez (£7.9m).

Despite Calvert-Lewin and Jota outscoring him in Gameweek 27, I’m hopeful it will pay off long term.

Also, a quick word on Kevin De Bruyne (£10.7m), who I sold ahead of Gameweek 24. Since making the move, his replacements (Son and now Fernandes) have outscored him by 42 points to 26. Yes, he’s probably the most complete footballer in the world right now and possibly on penalties, but is he an ‘essential’ FPL asset for the entire season? Not for me.

Looking ahead, Arsenal’s next four games after their blank Gameweek are against West Ham United, Brighton and Hove Albion, Southampton (if they fail to progress in the FA Cup) and Norwich City.

They possess a forward in Pierre-Emerick Aubameyang (£10.9m) who was the league’s joint-top goalscorer last season, and his double in the 3-2 win over Everton on Sunday puts him back on top of this year’s rankings, alongside Jamie Vardy (£9.7m).

It’s now six goals in his last seven league games, and 49 goals in 74 league appearances since joining Arsenal from Borussia Dortmund in January 2018. He probably doesn’t get the recognition he deserves for his goalscoring record but his numbers speak for themselves, and if Vardy were to blank against Norwich on Friday night, I’d be tempted to switch.

Dani Ceballos‘ (£5.2m) return to the starting XI on the right side of the double pivot in Gameweek 26 has had a positive effect on Nicolas Pépé (£9.2m), who has one goal, three assists and has created more chances (eight) than any other midfielder over the last two Gameweeks.

That’s something to monitor, but it’s 18-year-old Bukayo Saka (£4.5m) on the opposite flank who I’m most interested in.

Despite racking up the majority of his minutes at left-back (he’s classified as an FPL midfielder), he continues to thrive and provided his tenth assist of the season in all competitions against Everton. In fact, no other player has recorded more Fantasy assists (three) than him over the last five Gameweeks.

For those concerned about his ‘reverse OOP’ prospects, this average position map from Arsenal’s recent win against Newcastle United suggests it may not be an issue.

With Sead Kolasinac (£5.2m) out with a shoulder injury, the only thing to keep an eye on is the return of Kieran Tierney (£5.3m), who could threaten Saka’s minutes once fit.

Arsenal are now unbeaten in ten matches, and with only four points separating them from fifth place, which will provide a Champions League spot if Manchester City’s ban is upheld, it’s all still to play for.

Just above Arsenal in the table are Wolverhampton Wanderers, who have now gone four consecutive games without conceding – which corresponds with Willy Boly’s (£4.7m) return from injury. Only Liverpool have conceded fewer big chances than Nuno Espirito Santo’s troops since Gameweek 25 and investing in one of their defensive assets looks like a sound move.

Further forward, Adama Traoré (£5.9m) and Jiménez get all the hype, but if they continue in a 3-5-2, Jota could be the best option out of the lot.

Ahead of Gameweek 28, I’m interested in Harvey Barnes (£6.0m), who I talked up on the Scoutcast a few weeks back. Leicester City now have four matches they’re expected to win, and their opponents on Friday, Norwich, will probably be without Christoph Zimmermann (£4.4m).

When Zimmermann starts, the Canaries have conceded 22 goals in 15 games; without him it’s 29 in 12. Vardy and co won’t have a better opportunity to get back on track.

I also like Chelsea’s forthcoming run of fixtures. They won’t play Bayern Munich every week, and their underlying numbers remain good, despite winning just five of their last 15 league games.

I like Reece James (£5.0m) a lot, and this quote confirms how highly he’s thought of by manager Frank Lampard:

I tried to get him on loan at Derby last January. His delivery is too good, and when I say ‘too good’, I’m joking but I mean that we need to read what he’s doing. We need to get bodies in the box because that’s a huge asset. He’s a great kid who’s going to be a huge player for Chelsea. Without getting too far ahead, even though Trent is that good he’ll be challenging him.

If only Chelsea had a decent goalkeeper…

It’s hard to get excited by anyone further forward, but there are several soon-to-be returning options, like Christian Pulisic (£6.9m), Callum Hudson-Odoi (£5.3m) and Ruben Loftus-Cheek (£6.3m), who could shake things up.

So, here’s how I’m currently setup ahead of Gameweek 28, with either Barnes or James likely to come in. 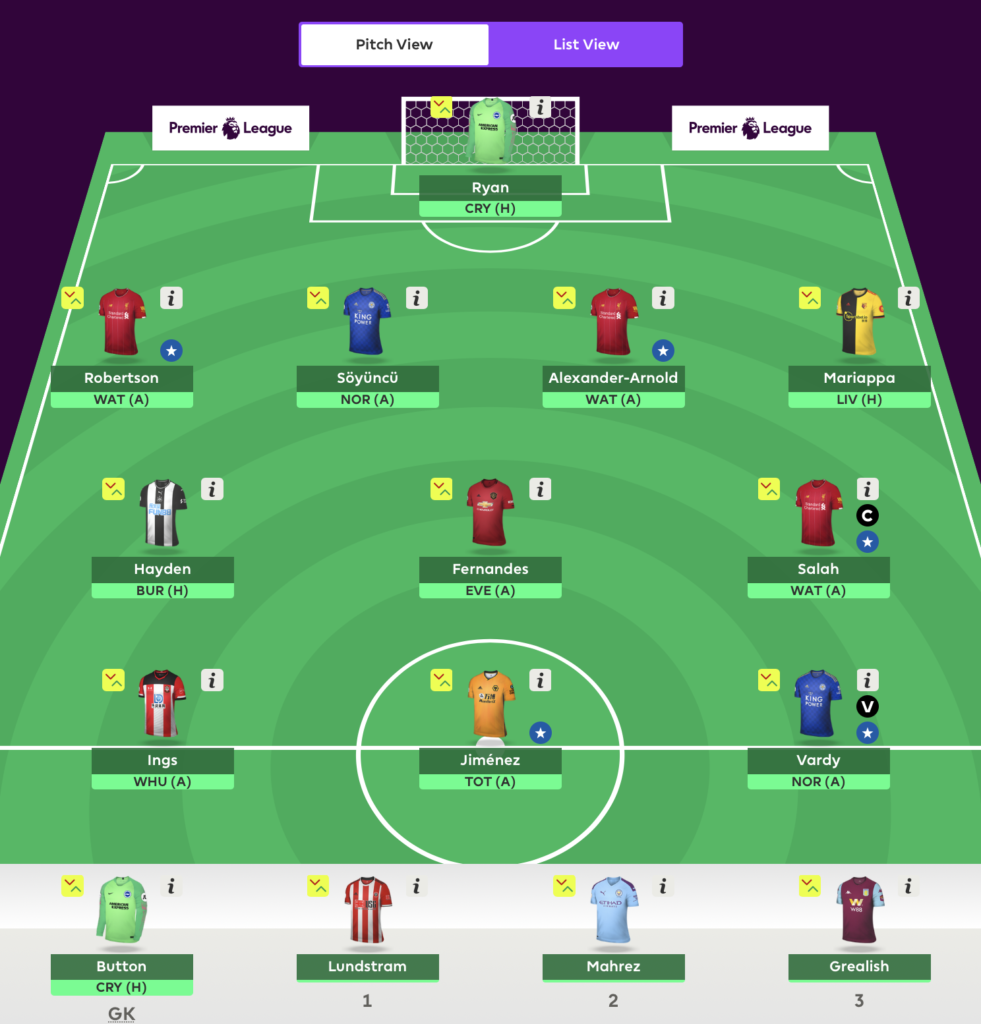