This is a place where the early-onset hangover from the night before meets the now-routine Sunday morning call of paranoia and anxiety. I groggily peer around the room and all seems familiar. The coffee table is messily dressed with the remnants of crisps and lager, the television is still on, things seem faintly in order; perfectly balanced, as all things should be. The fear recedes. A quick glance at the phone call-logs and messages – nothing worse than usual. Open the Livescore app and scroll. Arsenal, Newcastle, Norwich 0, West Ham 4. Michail Antonio with all 4 (four) goals. The heart rate quickens again. Fade to black.

Now this may have been slightly embellished for effect; I do not dare to puncture your perception of my lived reality.

However, it is true to say that I did not experience the joy of owning a differential, midfield-listed Michail Antonio (6.5) for his four goal and 26-point haul against Norwich. A season-changing event again slips into the ether as the final curtain call of the season draws closer. And in hindsight, as it always does, it seemed so obvious. A player in form against a side now beyond the description of fodder. A once-crocked wide-man now performing as talisman goal-hanger for a side desperate to avoid relegation. A green sea of fixtures as far as the ticker’s horizon extends.

I lucidly resolved the next morning to take a back-to-basics approach to establish why I missed this and how I won’t let it happen again. Let me introduce to you the spoils of this post-season research:

The Haggis’ Hierarchy of Needs (When Transferring a Player In) 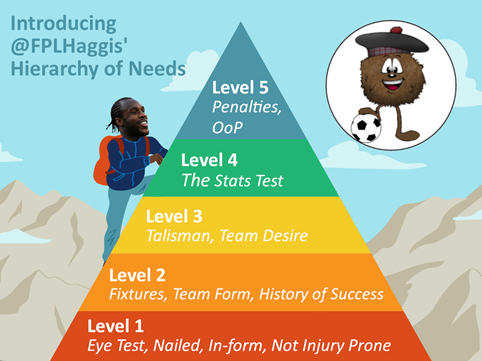 OK, so it doesn’t sound as punchy with the bracketed bit in, but it doesn’t make sense without it. Basically, I have riffed on the ideas of Maslow’s Hierarchy of Needs, a psychological study which explores the behavioural motivation of humans and used this to make a cool triangular chart for FPL. Edinburgh, I am ready for my honorary degree.

Right, let’s get to it; all you need to know is that the absolute requirements are at the bottom, and the higher-up stuff are the cherries on top. Or garnish, or whatever.

The above forms the composition of my dream fantasy asset. Very few players, even premiums, will ever tick all of the boxes at the same time, but I feel that it has been a rewarding process to visually prioritise my desires to help filter the plethora of options we sift through each week. I hope that this will get you thinking about what kind of player is on your shopping list – I would love to hear your thoughts.