For those that have not been following the Great and the Good series, Fantasy Football Scout Member Greyhead has been documenting the weekly successes and fails of some of the well-established names in the FPL community to see how we can follow in their footsteps. The Great and The Good are the Scouts Neale Rigg and Joe Lepper, Pro Pundits Mark Sutherns, Az, Lateriser, Fabio Borges and Tom Freeman, FPL “celebrities” FPL General and Magnus Carlsen and finally, from the Hall of Fame, we have Ville Ronka, Matthew Jones and Sean Tobin.

Each week for the last few years Greyhead has been posting the latest updates in our Community Article section packed full of insight and fantastic but somewhat questionable references – the latest of which from Gameweek 4 can be found here.

This week he turns his gaze to the new Community team, to see if they have what it takes…

“Fame
I’m gonna live forever
I’m gonna learn how to fly, high
I feel it comin’ together
People will see me and cry, fame”

The FPL Community’s got talent! Time to dust off your leg warmers, sweatpants and luminous lycra as we showcase some of the hidden managerial diamonds within our midst.

For those of you who follow along you may recall a few weeks we opened for auditions for members of the community to put themselves up for public scrutiny, so let’s find out which of them will star jump to success!

Whilst it’s great to follow along with some of the well-established names, the best advice and transfer tips can sometimes come from that bloke down the socially distanced pub, a comment on Scout (in-between the RMTs) or even a WhatsApp from someone who’s Auntie Pat saw that nice man Martial smiling as he was buying some new gloves and therefore will definitely score a brace at the weekend.

So, for a bit of fun, I will compare the fortunes of these relative unknowns against the more familiar names of The Great and The Good to discover new strategies and tactics. We may even find the next Ville Ronka!

WHO ARE YOU AND WHERE ARE YOU FROM?

There were queues around the building (it’s a small building) to sign up and show their skills but these are the folk that got through to judge’s houses (with no sign of Sinitta yet):-

Pete Beswick – strong pedigree and the subject of one of the cracking Meet the Manager series. He has been in the top 5,000 four times so knows his stuff and once met Kevin De Bruyne at Cheshire Zoo; I would be lion if I didn’t admit he was my first pick.

Darth Krid – despite evidence to the contrary he is actually a decent FPL manager with a career-high of 805. He has a love for Otamendi, plays for a girl’s football team in Bahrain and is rubbish at trivia.

Swanmoretime – in the interests of diversity I needed a welsh FPL manager and he was the only one that applied. Finished at 76,000 back in 2014 but he secured his place when he admitted he was the proud owner of an impressive white beard.

Reedy – maverick tendencies, this anti-dullard made some bold chip calls last year including triple captaining Lundstram, he has a top 5,000 finish so here’s hoping he excels against the experts.

Boris Bodega – Delighted to have the King of the Pundits tournament onboard, hoping his inclusion will gain his favour when it comes to this year’s community competition. Let’s keep our fingers crossed he’s more capable than the other famous Boris, bit of politics for you.

Pras United – 3 top 10,000 finishes and Mr. Consistent having not ended up outside the top 100,000 since 2011/12. Strong United connections, attending Phil Neville’s wedding reception back in the late 90s (kinda) but hopefully he’ll resist the temptation to bring in any of their defenders.

Doy – Finished just outside the top 10,000 last year and a devoted reader of The Great and The Good, well that’s what he told me, and I am a sucker for flattery so his call up was never in doubt.

AA33 – Leading the way in this year’s Scout Picks, beating them by 53 points, so already has a psychological advantage over some of The Great and The Good. Finished in the top 10,000 last year, has been playing FPL since he was 12 and a trivia king.

Chaballer – Founder of the top 1,000 Hall of Fame mini-league, has a ruthless streak demonstrated when he kicked me out of said league. A strong manager with three 10,000 finishes, likes to take a hit, a massive fan of virtual versions of FPL and good juju.

Dino – Not the dinosaur. Describing himself as a contrarian with a logical mind he certainly appears to be successful with five finishes in the top 10,000.

Milvus – The only manager to send me a formal application form, this man put the old in old school. Has been playing some form of FPL for 25 years, he lives in a lighthouse (allegedly) and once owned Ian Woan.

Sepp Blattered – only slightly less corrupt than his namesake, a seasoned veteran of 12 years and won me over by quoting Britney Spears lyrics. Hit me Baby one more time!

Finally, there is Professor Bear who should have been included in the final squad but due to an admin error he didn’t get on the team sheet. He has played for four years according to his career history and three of those were in the top 10,000, he will be my super-sub who can do a Giroud and come off the bench if any of the others buckle under the pressure.

The table below gives you a comparison of the Community Champions and The Great and The Good when it comes to transfer activity and armband choice:-

The Harry Redknapp of these managers is Chaballer with a strong 54-point gain from his wheeling and dealing. His success is the result of a strong wildcard in Gameweek 2 as he brought in James Rodriguez, Calvert-Lewin, De Bruyne and Martinez.

This compares well with The Great and The Good and particularly Ville Ronka, another to play an early wildcard but sixty points worse off in immediate transfer points as a result with much of this driven by his Son bad luck.

This means Chaballer is also top of team value at 101.6 but that is nothing compared to Ville’s 102.1, but who cares about value right?

Pras United is the best of the Community champions when it comes to captain calls with 72 points, not as quite as high as the faultless three of Tom Freeman, Magnus Carlsen and Fabio Borges who have 86 points, but impressive, nonetheless.

He has so far gone with a different captain each week with Salah, Aubameyang and last week’s choice Sterling all admirable picks, it’s only been De Bruyne who let him down in Gameweek 3.

Swanmoretime has been slightly less fortunate with only 22 captain points despite some logical picks although his gamble on Ings in the first week doesn’t look good with the aid of hindsight, never bet against Woy.

DIDN’T THEY DO WELL?

Early stages so far but this is how the Community champions rank against The Great and The Good:- 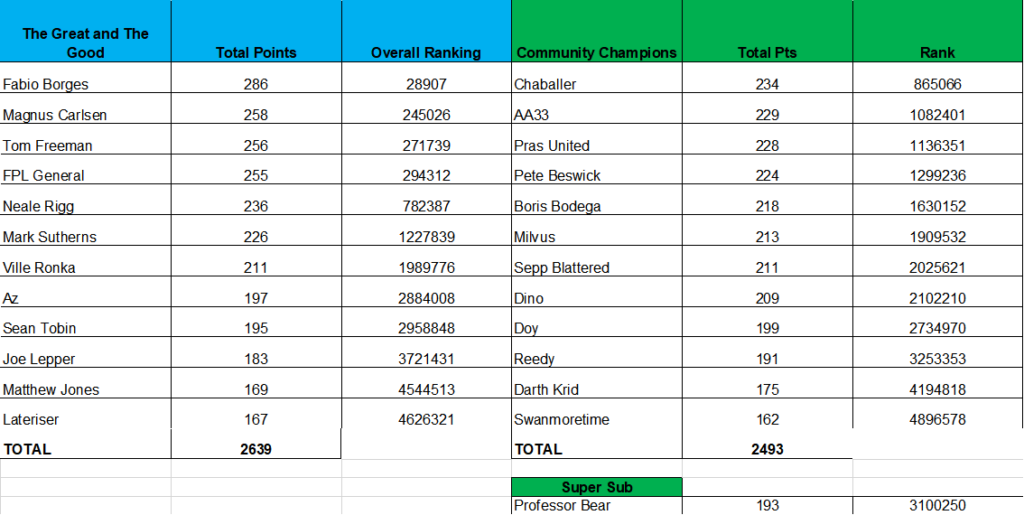 The Great and The Good are ahead for now with a collective 146 more points but none of the featured managers will be writing home about their rank, apart from maybe Fabio Borges.

Amongst the Community squad, Chaballer is leading the way closely followed by AA33 although the chaotic start to the season means none of them sit inside the top 800,000.

Half of them have already played their wildcard and my spies tell me Pete Beswick has pressed the button after an early season slump, maybe he has been unlucky having left the most points on the bench so far at 29.

I wonder if Sir Harold of Kane, currently not owned by any of the Community or The Great and The Good teams but joint top for shots over the last four weeks may end up in his thoughts?

There have been tales of woe across the team with Darth Krid wildcarding into a triple City/triple Wolves combination which looked good on paper, Boris Bodega left Wilson’s 16 points on the bench last week, Dino’s 26 points from his overhaul in Gameweek 3 must have made him roar and Doy was another to move out Son before he shone last weekend.

There are also some unusual moves in play from the managers which may yet prove genius, AA33 has kept faith with Werner and Havertz all campaign, Reedy started with a 4-5-1, Sepp Blattered selected the free-scoring Coady from the start and Milvus had Brewster before it was cool.

The Great and The Good have taken an early lead against the Community champions but just a glance through the current standings highlight what an odd season it has been so far with none of the teams looking that bad.

Rather than give up we should remember these words. “You’ve got big dreams. You want fame. Well, fame costs. And right here is where you start paying: in sweat.”

If we want green arrows, then now is the time to sweat.

For those affected by any of the topics raised in the above article then you can find me on Twitter at Greyhead19.