“Everybody’s talking at me. I don’t hear a word they’re saying, only the echoes of my mind”

Frantic, is the only way to describe the current FPL landscape with an overload of matches, an explosion of choice, rapid rotation and a cacophony of opinion for The Great and The Good to deal with.

Every day seems to bring forward a new so called “essential” player, with the midfield spots becoming a battleground, with options galore and everyone talking about their must-haves whether that be Fernandes, Foden, Martial, Pulisic or even dare I say Willian.

Question marks over the motivation of the top two clubs, along with fitness worries and rests for key players has seen managers wrestling with which of the heavy hitters from Liverpool and Man City to include. Each week sees us try to decipher news conference and team leaks both fake or Rockstar solid to second guess Pep and Klopp.

This has led to a rollercoaster of emotions for managers with pain for those who sold Salah, despair and then joy for Sterling owners and bewilderment at De Bruyne’s failure not to hit double digits against Newcastle.

As a reminder The Great and The Good are a handpicked group of FPL celebrities (?), FF Scouts or Pro Pundits who I will follow to see what we can learn as they navigate their way through the season. They are the Scouts (Mark, Joe, David, Geoff and Neale), Pro Pundits (Az, LTFPL Andy, FPL “celebrities” FPL General and Jules Breach) and finally from the Hall of Fame we have Ville Ronka, Matthew Jones and Sean Tobin. 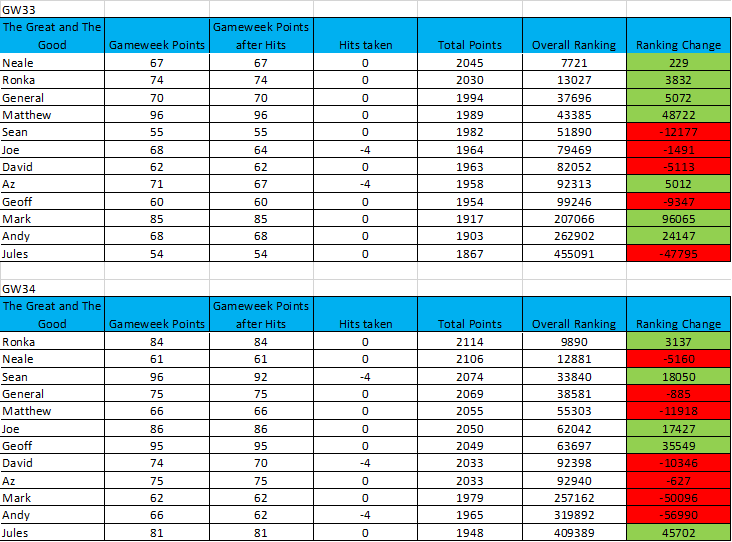 We have a new leader as Ville Ronka has finally knocked Neale Rigg off his perch after twenty weeks of dominance, Salah was critical in this switch as Neale moved him out just before his Brighton brace.

The competition looks far from over though as Sean Tobin, in third, is also shown strong form equally the Finnish Enigma’s 13 green arrows in the last 16 weeks and he still has his Wildcard to play.

Looking back over the last couple of weeks, Gameweek 33+ belonged to the Fernandes captainers with Matthew Jones and Mark Sutherns leading the way. Matthew was only four shy of a century and put himself right back in contention with Mané and a triple United attack including Greenwood the key difference, he’ll hope it’s Sadio’s turn again with Burnley up next.

Gameweek 34+ was all about Mo with those who kept the faith reaping the rewards and those who didn’t, well it let’s just say it ended in red for most. The top scorers were the Bench boosting Sean and Geoff Dance, but Joe also hit a strong 86 points, his power five complemented by Serge Aurier and Greenwood.

The King of the Fantasy Canucks, Geoff, who’s Canadian in case that’s not obvious, has gone chip crazy playing his wildcard in Gameweek 33+ quickly followed by his bench boost in Gameweek 34+.

The full moves of his wildcard are below:-

He stuck with a Liverpool triple but doubled up at the back with Mané making way for Robertson, he took out the blanking Jimenez and gambled on Jesus, a wise move in hindsight.

Buoyed by the sixteen points left on his bench after the wildcard he hit the boost button in Gameweek 34+ but unfortunately was one of those who suffered from the Nketiah red card and so ended up with only 11 points from his magic plank.

Sean also pulled the trigger and played all fifteen but suffered the double frustration of Foden’s missed opportunities and the Wolves clean sheet wipe out by Egan.

Only Joe is left to play what has become a cursed chip following the restart, he will have to beat 33 if he is to match Andy’s Dwight McNeil inspired score back in Gameweek 27 – simpler times!

This is a summary of the transfers for the two weeks :

A flurry of transfer activity over the last week, unfortunately Andy’s hit to take out Salah before his haul hits the headlines for all the wrong reasons, maybe he should have just swopped Foster for Pope.

On the flip side David Munday brought Salah back into his team in Gameweek 33+ along with Greenwood which proved an inspired set of transfers, although he then ruined it by bringing in a simultaneously misfiring Antonio and Foden for a hit.

As is customary, Az took another minus four for Sterling, although it paid off in Gameweek 34+ and despite my ribbing he is not the only one to have taken an aggressive approach this season as Mark and Andy join him as joint kings of the trigger finger with 10 hits.

Perhaps a more conservative approach is better advised, Ville Ronka had taken six hits up to Gameweek 14 but since then has only taken one and during this same time he gone from being outside the top 500,000 to being inside the top 10,000. Fortune favours the cautious!

The template for The Great and The Good looks like this:-

* brackets show number of teams they appear in

A few changes to the template with Martial and Pulisic coming into midfield, Greenwood comes in as the third striker and the budget picks of Martinez and Femenia make up the numbers.

Captain decisions have been key since the restart with some big hauls from the likes of Martial, Fernandes and of course Salah leading to green arrows for many of The Great and The Good.

Bruno was the right choice in Gameweek 33+ and half of them went down the Portuguese path but only Mark stuck by him the following Gameweek as others were swayed by De Bruyne’s advances, his loyalty was rewarded.

Interesting to note Bruno has been the most popular captain pick since lockdown, picked 35% of the time by these prominent FPL managers.

The best of this bunch at armband selection are Az and Sean with a 13.7 average return on their captain calls. Jamie Vardy has been the best returner for Az with an average of 18.3, will he bring him in and captain again this week?

Meanwhile, Sean’s best pick has been De Bruyne who he has only gone with twice but scored 44 points from those two occasions. You can have a look at your own stats via https://www.anewpla.net/fpl/report/

Whilst, like last year, Salah has remained the favourite at a 27% rate of selection there have been much more variety in their picks with 22 different players given the armband so far this season.

Yet, our most successful manager, Ville Ronka, has shown unshakable belief in Salah going Mo for 44% of the Gameweeks, so maybe we should consider more of set and forget approach. Especially with Bruno appearing to be a ready-made perma-captain until the end of the season.

I was asked last week how this year’s intake have compared against last season’s The Great and The Good and the results are in.

However, others have fared better Ville Ronka has returned to form after last year’s 47,000 finish, FPL General, although a newbie in this group, has recovered from a nightmare last year where he finished outside the top 500,000 and it’s good to see former member Jay Egersdorff back to his best and inside the top 10,000.

So, the evidence shows that overall The Great and The Good have found it more difficult this time round compared to last season but not entirely unexpected with Project Restart playing havoc with chip plans, the continued increase in the number of overall players and the wealth of information now available to a wider audience.

Whatever the reason it is looking like it will be a tight finish in determining who will be this year’s greatest of The Great and The Good and captain calls will be key in these final weeks.

For those effected by any of the topics raised in the above article then you can find me on Twitter at https://twitter.com/Greyhead19